About Midnight on the River Grey by Abigail Wilson

She knew the house was keeping secrets. If only the darkness would speak…

After her elder brother’s mysterious death, Rebecca Hunter vows to expose the man she believes responsible: Mr. Lewis Browning—known by the locals as the Midnight Devil and by Rebecca as her new guardian.

Summoned to his reclusive country estate to await her London season, Rebecca plans her own secret investigation among the darkened corridors of the mysterious Greybourne Hall. Yet Lewis Browning is not as she once imagined, and his motivation is horribly unclear. Recurrent night-mares and Rebecca’s restless feelings are further complicated by the shadow of her mother’s pri-or descent into madness and whether she, too, will follow the same heartbreaking path.

Even as midnight rides, strange injuries, and further murders lead back to Mr. Browning, Rebec-ca can’t ignore the subtle turn of her heart. Has she developed feelings for the man she swore to see hanged? And moreover, can she trust him with her uncertain future?

Review of Midnight on the River Grey

This historical mystery/romance has everything I look for in this genre. The strong heroine who must overcome her 19th century restrictions. The atmospheric setting – this time a country manor with fog, forest, barking dogs and gunshots. And a hero who is not what he appears to be. Add an unexplained death, mysterious meetings between neighbors, midnight rides and missing bottles of wine and you have a tale to keep you imaging all sorts of possible outcomes, right up to the last bit of the story.

In most stories of this type, the protagonists are young and attractive, so of course, they are going to live happily ever after. I really enjoyed seeing the older woman, Aunt Jo who is Rebecca’s companion, get her HEA also! Having a sweet dog, Sophie, in the story doesn’t hurt my opinion either.

Midnight on the River Grey takes place in the same time period as Ms. Wilson’s first book, In the Shadow of Croft Towers. There is a teeny bit of overlap between the two novels – from an historical perspective. But they are completely standalone stories. It was just nice to see that bit of continuity.

Abigail Wilson has made her mark in my literary brain. After reading her first two books I am, undeniably, a fan.

Add Midnight on the River Grey to your Goodreads shelf: 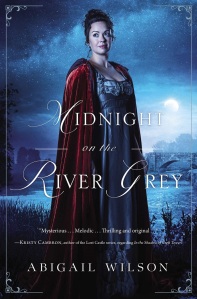 About Kingdom of Exiles by Maxym Martineau

Exiled beast charmer Leena Edenfrell is in deep trouble. Empty pockets forced her to sell her beloved magical beasts on the black market—an offense punishable by death—and now there’s a price on her head. With the realm’s most talented murderer-for-hire nipping at her heels, Leena makes him an offer he can’t refuse: powerful mythical creatures in exchange for her life.

If only it were that simple. Unbeknownst to Leena, the undying ones are bound by magic to complete their contracts, and Noc cannot risk his brotherhood of assassins…not even to save the woman he can no longer live without.

Review of Kingdom of Exiles

This book has received a lot of pre-release press, including the ability to ‘Read Now’ on NetGalley. Which means, you don’t have to request and be approved to receive book – just download it and start reading. So I wondered…..what is going on with this debut novel?

It is good. Really good! Kingdom of Exiles may turn me into an annoying fan that starts asking about the next book in the series.

I love the characters. Leena and Noc have a pretty immediate attraction to each other, despite the fact that they started out as adversaries. The reader can sense it. They have both had difficult pasts and neither is forthcoming about details. But their interest in each other will not go away and because of their pasts, the attraction is pure danger.

Noc’s brotherhood of assassins proves to be a great supporting cast of characters. Each have their own personality quirks and I am guessing, each will get their own story in future installments. If they don’t, I shall be quite disappointed 🙂 .

There is a third set of characters that I enjoyed. The beasts. As a charmer, Leena is able to befriend and control a wide variety of creatures with different skills sets. Each is a potential ally in sticky situations. But they are also creatures of heart and the ability to bond with the right people. These creatures add to the creativity of this fantasy setting and some of them will also need to get their own story.

The situation seems impossible. There is no way Leena and Noc can ever be together. The hopeless circumstances weigh oh, so heavily on Noc and later on Leena when she learns the facts. The emotion is at times heartwarming and other times heartbreaking. The bond between Noc and the assassins is heartfelt. Combine all this with plot thick with action and intrigue and I dare you to go to bed early.

I am so glad I decided to be among the early readers of Kingdom of Exiles. This is going to be a heck of a series. Now, Ms. Martineau, when is the next book coming out?

Add Kingdom of Exiles to your Goodreads shelf:

About Constellation XXI by Edward Hoornaert

Although Sienna Dukelsky had been the most promising student pilot at Keening AstroSpace Academy, she inexplicably settles for a routine, unglamorous job guiding incoming spaceships to safe berths at Farflung Space Station. Rumors, never verified, blamed her surprising decision on a boyfriend who got expelled from Keening.

Crispin Hunt, fleeing enemy forces, is greeted by a tugship captained by Sienna, his former girlfriend. Love rekindles—until an old betrayal boils up. Her ship loses power while aimed dead on at the space station, forcing Sienna to confront the terrifying truth about Crispin and his cargo…and her routine job suddenly becomes the most important in the entire galaxy.

First, I must apologize for this review being so long in coming! That was no reflection on the author. OK, actually, maybe it is. I first started reading Constellation XXI and got distracted by names that were familiar – that’s when I realized this is book 3 of the Repelling the Invasion series. That reminded me that the first book in the series, The Guardian Angel of Farflung Station, is one of my favourite SFR stories! Which meant I was then so eager to reread it that I couldn’t get into the new story until I did. Which also meant that I then went on to read book 2, Escapee, which was another great story. So I FINALLY came back to Constellation XXI when I found my way out of that rabbit-hole. (Which was a fun and much recommended rabbit-hole to fall into to be sure!)

Constellation XXI returns us to the Dukelsky family – this time with Sienna, cousin to Duke, whom we met in book 1. Sienna is eager to prove herself, having recently completed a academy training and tugship apprenticeship. She finally gets a chance for a solo captaincy – even if she is the only crew on a new Thought Ship, which operates in response to brainwaves rather than manual controls. Her assignment is to monitor the emptiest section of space around Farflung Station, an important responsibility to monitor for errant ships and keep collisions from affecting the station by docking incoming ships with the station properly. Not to mention monitoring for any incoming ships from Proxima, home to a cruel race of people at war with the rest of the galaxy.

If only she could stop falling into daydreams about Crispin Hunt, a former lover that she hasn’t seen in years, but suddenly comes into renewed contact with. Literally, it turns out as he appears at the helm of a freighter coming in from the Black, as the sparsely populated borderlands area was known. Crispin is captain of the Constellation XXI, coming in with a cargo of exotic animals for sale. Sienna isn’t sure if she wants to welcome him or blast him from space. The only thing she is sure of is that she doesn’t really want him in her life right now, and she’s pretty sure that feeling is mutual.

The story sounds simple and harmless enough – meeting up with an old lover, rekindle an old attraction that never quite went away, and a coming-into-her-own story of a rookie making a place for herself in a competitive job environment. Simple enough that is until you throw in a group of marines eager for a fight and with no respect for a rookie tugship captain, old misunderstandings and misdeeds, and ultimately, a ship-wide power loss that puts two ships on a deadly collision course with Farflung Station itself. And somehow, it’s tied to the mysterious cargo that Crispin is bringing in from beyond the border planets – and which he isn’t being entirely truthful about. Secrets that threaten far more than just a collision with the station, but rather a collision with perceptions that may change the way of life and war for the galaxy.

Yes, Constellation XXI works perfectly fine as a standalone read, but I recommend reading any series in order. There always seems to be background data flotsam that makes the environment of the story richer and ties characters into a larger universe. As I said before, this series is a fun one to fall into. Ed Hooenart has a talent for bringing out the humour and humanity of his characters. Repelling the Invasion is probably my favourite of his series, and Constellation XXI just proves that his stories just keep getting better. Highly recommend reading this one!

Disclaimer: An ebook of Constellation XXI was provided in exchange for an honest review.