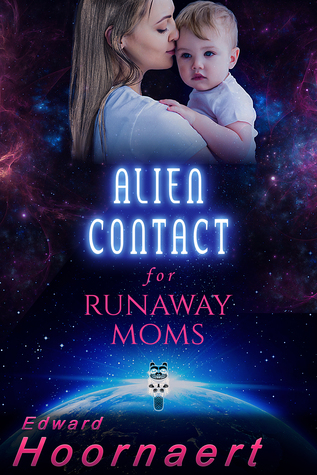 Audra Verhailey is good at running – that’s a really good skill to have when she needs to get away from an abusive boyfriend, but how is she going to manage it with an 8-month-old baby in tow? For a start, by going to the last place on Earth anyone would think of going. So Audra runs to the abandoned underground cities on Kwadra Island, home to the all-too-intriguing Kwadrans, aliens who had appeared suddenly four years ago when they mysteriously moved their island home to our world. No human in her right mind would go there, right?

Somehow on the way, Audra picks up a volunteer guide in the form of Tal Pelletier, Kwadran construction worker, who finds Audra and baby Roxie right after they reach Kwadra Island. He agrees to lead her to the underground, as much to his own surprise as to hers since it’s the last place he wants to go, too. Underground holds too many memories and he really doesn’t want to confront his painful past. But there’s something about the way baby Roxie smiles and gurgles up at him that he can’t resist. Yeah, it’s got to be the baby. It definitely isn’t the way his body reacts when he looks at Audra. Nope, not the annoying female who is obviously hiding a secret and running from who knows what kind of trouble.

Nearly a month after Audra’s disappearance, her uncle Matthew, an expert in cyber security, arrives on Kwadra Island. His search for his missing niece has led him this far, but now her trail is cold. Opsie Beaverclaw, duchess of the Beaver Clan, agrees to help him search the Island for her. It’s just because she’s bored after resigning as head of the Kwadran security force. OK, so maybe it’s his determined attitude to find and protect his niece that appeals to the scarred woman in her. Maybe it’s just those appealing blue eyes.

Audra finds more underground than she expected. It’s not as abandoned as she thought it would be, and there are more dangers than just getting lost on unfamiliar streets. Good thing Tal is there to guide and protect her, even if she doesn’t understand why he just walked away from his job on the surface and has stayed with her this long. Or is the biggest danger Tal himself. But now there’s evidence that someone is after them, or at least her. Is it her ex coming to steal Roxie from her? Audra has to learn to trust more than just herself.

Alien Contact for Runaway Moms provides two romances for the price of one! While the main story centers around Audra and Tal, I was just an happy to read about the relationship developing between Opsie and Matthew. Maybe because Opsie is portrayed in a different light than in previous books in this series. I really didn’t like her character before, but in this book, she steals the scenes with her strength and attitude.

I usually avoid romances that have ‘baby’ anywhere in the blurb, but I enjoyed the other books in this series so much that I was happy to give this one a try and I’m glad I did. I really need to find a better way to describe this series than ‘quirky’ or ‘a fun romp’ – those are exactly the right words, I just have been overusing them. Hoornaert’s balance of humour and serious story is delightful to read. I never recommend any of these books as standalone, although some people might be okay with that. I prefer to read the series in order to get the backstory that can’t be explained in each new book, the growing depth of characters and how they interconnect. In this book, I think not knowing more about the Kwadran society and Opsie’s background particularly, a reader might miss some of those connections.

Disclaimer: An ebook of Alien Contact for Runaway Moms was provided in exchange for an honest review.

Add Alien Contact for Runaway Moms to your Goodreads shelf:

A woman with power over fire and illusion and an enslaved son of a chieftain battle a corrupt empire in this powerful and deeply emotional romantic fantasy from the USA Today bestselling author of Radiance. Every year, each village is required to send a young woman to the Empire’s capital–her fate to be burned alive for the entertainment of the masses. For the last five years, one small village’s tithe has been the same woman. Gilene’s sacrifice protects all the other young women of her village, and her secret to staying alive lies with the magic only she possesses. But this year is different. Azarion, the Empire’s most famous gladiator, has somehow seen through her illusion–and is set on blackmailing Gilene into using her abilities to help him escape his life of slavery. And unknown to Gilene, he also wants to reclaim the birthright of his clan. To protect her family and village, she will risk everything to return to the Empire–and burn once more.

Phoenix Unbound lived up to all my very high expectations. First, there is a dark situation that the hero and heroine must rise above, with so many obstacles thrown in their way. The greatest obstacle is the Krael Empire itself, with it’s iron fisted grip on the people, its decadent ways and total disregard for the people that they rule. Slave gladiator fighting and horrible burning sacrifices, which they delicately dub the ‘Rites of Spring’, make the Empire so easy to hate. I enjoyed all the little things that were thrown in to describe the people and culture of both Azarion’s and Gilene’s people. The dyes that Gilene’s people make. Their clothing and food. The talented horse riders among Azarion’s people, the Savatar. The Savatar berry gathering excursion. The barrows, with the supernatural experiences that go with them. Another thing I liked is that there is no love lost between Gilene and Azarion from the beginning. Azarion’s use of Gilene to reclaim his birthright means Gilene is forced to go to his homeland instead of hers. She is not happy. Not happy at all. It will take a long time for them to appreciate each other. In the meantime, as the reader, I liked both of these character even if they did not like each other. Both had a sense of responsibility to their people. I wanted them to overcome their differences and figure out a way to get together, even if it seemed pretty impossible. It is those impossible situations that make for such a good story. Speaking of impossible, the Krael Empire seems quite impossible to defeat.  They have all the power at the beginning.  But the series title is Fallen Empire, so it is not a spoiler to say that our hero and heroine will go up against the Empire, each in a way that reflects their own strengths. The ending, was very satisfying. Even though this is the first book of a series, you don’t get that feeling at all. Phoenix Unbound is a complete story with no loose ends. Which also makes me happy! I think it is fair to say that Grace Draven has much talent. Including Phoenix Unbound, I have read 8 books by Ms. Draven and everyone of them is a winner. If you enjoy fantasy with a generous dose of romance, you cannot go wrong with this author. Through NetGalley, the publisher provided a copy of this book in exchange for my honest review. 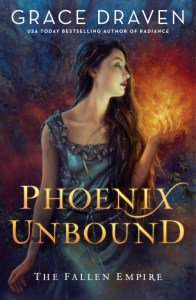 About Treacherous is the Night

In 1919 England, in the shadow of The Great War, many look to the spirit world for answers. But it will take an all too earthbound intrigue to draw in the discerning heroine of Anna Lee Huber’s latest mystery . . .

It’s not that Verity Kent doesn’t sympathize with those eager to make contact with lost loved ones. After all, she once believed herself a war widow. But now that she’s discovered Sidney is very much alive, Verity is having enough trouble connecting with her estranged husband, never mind the dead. Still, at a friend’s behest, Verity attends a séance, where she encounters the man who still looms between her and Sidney—and a medium who channels a woman Verity once worked with in the Secret Service. Refusing to believe her former fellow spy is dead, Verity is determined to uncover the source of the spiritualist’s top secret revelation.

Then the medium is murdered—and Verity’s investigation is suddenly thwarted. Even Secret Service agents she once trusted turn their backs on her. Undaunted, Verity heads to war-torn Belgium, with Sidney by her side. But as they draw ever closer to the danger, Verity wonders if she’s about to learn the true meaning of till death do us part . . .

Review of Treacherous is the Night

Treacherous is the Night is an historical mystery that takes place after the end of the war to end all wars – World War I. A traumatic time in Europe, the effects of the war are far reaching and when Verity Kent is ‘visited’ by the spirit of her wartime friend, she knows someone is lying and is determined to find the truth.

Riding along with Verity, in her quest to discover the facts behind the message, is her husband Sidney. They find Belgium devastated by the war and full of both friends and foes. The investigation takes many unexpected detours and turns up more than just a lost friend. The mystery is complex and the solving of it very satisfying. The twists and turns made this book very difficult to put down.

But there is more than a mystery going on in Treacherous is the Night. Since Sidney’s return from the war, his relationship with Verity has been strained. Uncertain of their future together, Verity knows they are both keeping so many secrets from each other. While the investigation takes them on a trek through war-ravaged Belgium, Sidney and Verity chisel away at the war-built wall that stands between them. The trip will be one of many discoveries. This correlation between the war-torn land and the relationship between the not-so-happy couple lead me to the conclusion that Treacherous is the Night is an ode to the survivors of war.

Not only those survivors that fought directly in the war, but also the families of soldiers, as well as those working tirelessly for their country. When the war is over, there is still so much to be dealt with by so many people. The restoration of the land, cities and homes destroyed by war. The physical healing of bodies injured by war. But by far the greatest healing has to be mental. For soldiers trying to return to their old way of life. For the spouses and families adjusting to the changes in the soldier that just came home. For soldiers adjusting to the changes in their loved ones. Post war can never be like it was before the strife started.

By the end of the book, there is hope for Verity and Sidney, just as there is hope for everyone else recovering from the upheaval of war. The positive ending was just what I needed to appreciate everything this book encompasses. Mystery, suspense, love, and hope.