About A Match Made for Murder by Iona Whishaw

It’s November, and Lane and Darling have escaped the chilly autumn in the Kootenays for a honeymoon at the posh and romantic Santa Cruz Inn in sunny Tucson, Arizona. But despite her very best intentions to relax, soon after their arrival Lane’s plans to spend the holiday poolside with a good mystery are interrupted by gunfire. One of the hotel’s wealthy guests has been shot point blank and Lane is second on the scene.

Though Lane and Darling attempt to distance themselves from the investigation, the longer they stay at the Santa Cruz Inn, the deeper they are drawn into a web of suspects and bystanders, and a collection of seemingly perfect marriages fraught with jealousy and violence. The situation threatens first their honeymoon and then their lives when Lane puts herself directly in the sights of local criminals who will stop at nothing to get what they want.

Back in Nelson, Sergeant Ames has been left in charge of the department during Darling’s absence. As he investigates a case of vandalism at the Van Eyck garage, it seems to lead directly to the death of the suspected vandal himself. Working with Constable Terrell, the new recruit, to piece together what happened in this strange and unsettling murder, Ames finds his romantic interest in mechanic Tina Van Eyck creates complications that are more than awkward; they could be deadly.

Review of A Match Made for Murder

The Lane Winslow Mystery series is one of my favorites in historical fiction.  The post-WWII historical setting, the former spy heroine, the Canadian small town police inspector hero, and the colorful local personalities all combine to charm me into reading each successive novel.

This time, the action moves to the United States.  On their honeymoon, Lane and Darling check into a resort in Tucson, Arizona, where trouble finds them.  Or they find trouble.  Depends on how you look at it.  🙂

Darling wants nothing more than enjoy his honeymoon and spend some time with an old friend.  But when a murder happens right in front of Lane, he knows that is not going to happen.  Darling is the man that recognizes his wife’s independence, intelligence, heart and determination to see justice done. This is a couple for the modern age of the 1940’s and for today.

While things get complicated in Tucson, back home in Nelson, Sergeant Ames has his own case involving a woman that he would like to get to know better.  The back and forth between Tucson and Nelson is easy to follow and having two cases to follow is no problem.  The question is, and you know you have to ask it, are these two cases related?

I won’t answer that question.  There are all sorts of spins and twists to keep you guessing – just the way I like it.  I will also say that Sergeant Ames is a character that is endearing himself to me more with each novel in this series.

Both cases highlight discrimination.  In Nelson, Ames is working with a new recruit, Constable Terrell, who is black.  In Tucson, Lane is assisted by a resort maid and a taxi driver who are immigrants from Mexico.  The discrimination is not overly emphasized, but it is not ignored either, adding the historical aspect to intolerance that is not all that different from the prejudices of today.

The series genre is hard to pin down.  The sometimes quirky, and always strongly-developed characters give this a cozy mystery feel, but the plots feel a like straight murder mystery.  Readers of both genres will appreciate Lane Winslow.

Thanks to the publisher who provided a copy of this book in exchange for my honest review.

Add A Match Made for Murder to your Goodreads shelf:

Pre-order A Match Made for Murder (releases April 28): 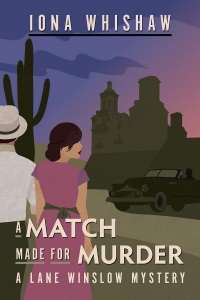 About Starbreaker by Amanda Bouchet

THEY NEVER WANTED TO BE HEROES

Captain Tess Bailey and Shade Ganavan are still the galaxy’s Most Wanted, and with revolution in the wind and the universe on the brink of catastrophic war, the situation couldn’t be more desperate. Despite the Dark Watch scouring the known sectors for them, rebel leaders have handed the crew of the Endeavor a delicate and dangerous mission: break into Starbase 12 and free renowned scientist Reena Ahern. She’s the only one who stands a chance of tipping the odds in their favor for the first time in decades.

BUT PULLING OFF THE IMPOSSIBLE IS WHAT THEY DO BEST

The clock is ticking. But as their attraction builds and secrets are revealed, Tess and Shade must decide if they trust each other enough to execute this impossible prison break. They could change the course of history, but they’ll be risking everything… They’ll just have to tackle one crisis at a time.

Is there anyone who doesn’t appreciate a good Robin Hood story.  The story of the rebel gang reallocating vital resources to help those in need has been told many times, in many ways.  With the Nightchaser series, the setting is the future.  In space (mostly).  The heroine’s father is the rich ‘king’ who’s resources are commandeered for the poor refugees.  A reader may even find a Sheriff of Nottingham, a Little John and a Sherwood Forest.

I loved Nightchaser, so there was no question about reading Starbreaker.  Amanda Bouchet’s characters are complex, caring, heroic and maybe a little bit crazy to go on the missions they take on.  The odds are always stacked against them, but with the best criminal crew available, the odds can be overcome.  I love that the mission seems impossible, that I know they will pull it off, but also, that I have know idea how they will pull it off.

Tess and Shade have a relationship that got off to a very shaky start (see Nightchaser), but even in the beginning, they seemed destined for each other.  In Starbreaker, there are those that seem to disagree with that – Shade’s former colleagues, Tess’s crew – but still the couple persists.  Since the story is part scifi adventure, part romance, I have no doubt that they will continue to persist, but it is fun reading about all the curves and line drives that get thrown at them.

There is an overall galaxy domination plot that is driving all the smaller plots.  That Tess, Shade and the crew of Endeavor are intimately involved in many ways, makes each action they take critical to the overall storyline.  Also crucial is family.  Tess’s family to be specific.  I’m not talking about her crew.  Family ties are conniving, complicated, and fascinating.  I hate to give more details at this point.  But if you thought our heroine’s family was disfunctional in Nightchaser, wait until you read this book!

Starbreaker and the Nightchaser series is impressively complex with a non-stop action plot and just the right amount of romance.  The story does have a semi-solid conclusion, but there are enough unfinished details to keep me on the hook for the next book (without calling it a cliffhanger).  If you haven’t already, start this series with Nightchaser and then dive right into Starbreaker.

Through Edelweiss, the publisher provided a copy of this book in exchange for my honest review.

Add Starbreaker to your Goodreads shelf: 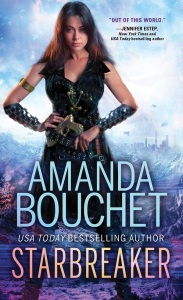 About A Touch of Darkness by Nita Round

In the shadows, treachery and betrayal grow unseen.

The state funeral of Princess Olivia at Port Ruth marks the end of the Queen of the Desert’s reign of terror. As Lucinda, Magda and Ascara attend this grand ceremony, all is not as it seems. A storm of secrets and lies emerge from the shadows and the darkness threatens to destroy them all.

No matter where Magda goes, her heritage calls to her. Even when they make their way home, peace and safety are still not theirs. Malice and betrayal, hidden and out of sight, finds the three women and threatens to pull them under the waves of death and pain once more.

For the Trinity of Truth: Raven, Fire and Ice, there can be only one way forward, but at what price?

Review of A Touch of Darkness

My favorite book in the series, so far. The trinity of Raven, Fire and Ice continue to encounter dark powers and plotting. The story moves quickly from Port Ruth, where the last story ended, back to Verity, my favorite airship. Verity makes an excellent stage for adventure, espionage, romance and danger.

A Touch of Darkness further explores the closeness of the three friends Lucinda, Magda and Ascara. This is a slow burning romance that is moving at just the right pace, with flirting mostly. But finally, there is an outright serious relationship conversation, with hints of what may come.

This book also explores the background of Magda and Ascara a bit more, and sets them on future paths that are sure to be formidable. One of these paths means the trio heads for Magda’s home float (a group of boats gathered to form a community). Naturally, it won’t be a straightforward trip. I would be so disappointed if there was not some peril. I was not disappointed.

A Touch of Darkness does end on a cliffhanger. So minus ½ star for that. Only ½ because the author has stated the next book is not far behind. If you don’t mind a bit of a cliffhanger, and you do like steampunk adventure, great characters and the best airship in steampunkdom, this your book.

Add A Touch of Darkness to your Goodreads shelf:

Purchase A Touch of Darkness: