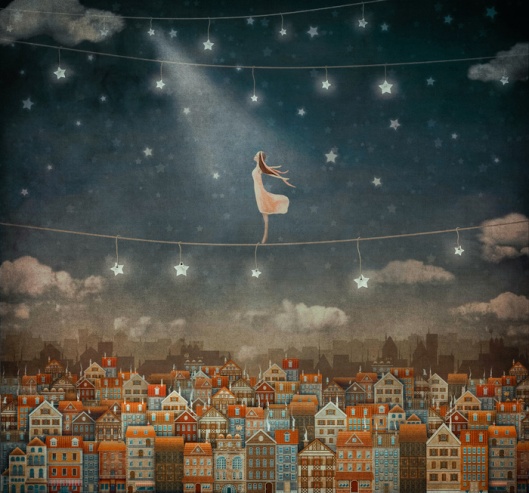 Illustration of cute houses and pretty girl in night sky by Natalia.maroz

I am just about to start Vega Falling by Sabine Priestley.  It’s book 2 in her exiting new urban fantasy series Tethered Wings.

After months on the wait list, I am finally able to check out and listen to A Study in Scarlet Women by Sherry Thomas.  If you wonder what Sherlock Holmes would be like if she was a woman, you might enjoy this historical mystery. 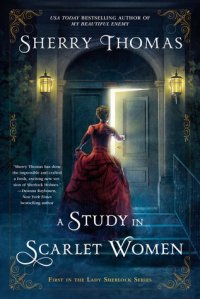 When skeptic journalist Sandra Lowell interviews a doctor who claims to have mastered astral projection, she volunteers to prove the doctor wrong. Mysteriously, the doctor’s new-fangled machine works, and Sandra’s mind is transported into the body of an about-to-be married, and hysterical, woman in another land.

Daveck, head warrior of West Farii, needs to recover the Zorash—an ancient totem that protects his planet. Stolen by his fiancée’s father, Maglek, the totem’s loss has meant twenty years of dangerous climatic upheaval, which threatens to destroy his world. Daveck will stop at nothing to find the totem, including marrying and forcing Maglek’s daughter to reveal the totem’s location. Little does Daveck know that the woman is no longer Maglek’s panicky daughter, but the strong and intelligent Sandra.

In order to save his planet, Sandra and Daveck must team up, all while fighting their combustible chemistry. Can Daveck learn to trust the daughter of his enemy? To accept that she’s not the woman he sees? Can Sandra find a way to keep the love she’s found? Or will their world and love be lost to Maglek’s evil plan?

Review of The Shimmering

The Shimmering is an entertaining short read that starts on Earth with an experiment in astral projection and ends up on a planet far far away. During her out-of-body experience, Sandra is pulled through the stars to the world of Farii, giving the term ‘astral projection’ a double meaning.

Travelling directly into a politically charged socially awkward situation, Sandra lands in a body that belonged to a woman who purposefully left her body to avoid said awkward situation. That was the first sign that Sandra was in a predicament. It doesn’t take long for Sandra to get into this situation so you know that story is going to move right along.

The action does proceed quickly and Sandra comes face-to-face with her true predicament – a man. Daveck is his name and he and the body formerly known as Lira are to be married. A lot of trouble (action) ensues, intermingled with an equal amount of flirting. Both Sandra and Daveck challenged/frustrated the other sexually at every step of the way – a little equal opportunity flirting on a world where women taking charge is not the norm. Sandra and Daveck quickly formed an alliance, so-to-speak, in order to face the bad guy head on. If this had been a longer novel, the bad guy would have been a great character to expand on. He was definitely insane.

If you are a Stargate fan, you might think fondly back on a particular episode – Touchstone – where the team had to hunt down a climate control device.  Similar circumstances apply in The Shimmering with the addition of a heated romance.

The Shimmering is my first Susan Kearney book since I enjoyed the Pendragon Legacy series several years ago. Both series are a fun combination of genres that will appeal to scifi romance readers who enjoy a little paranormal mixed in.  At a mere 98 pages, don’t expect a deep, complex story.  Do expect what is advertised – a couple of hours of pure escapist fun, no strings attached!

I received a copy of this book from the publisher via NetGalley in exchange for an honest review.

Add The Shimmering to your Goodreads shelf:

In a bleak future where government systems are breaking down and poverty and violence reign, Madison Johnson is about to qualify as a doctor, after years of study and backbreaking work, in order to keep the promise she made to her dying sister, only to have an arrogant alien take over the hospital and decree that she would no longer be allowed to practice medicine. Hassled by the resistance group that’s trying to recruit her and exhausted from working impossible hours, Madison struggles to convince the disturbingly sexy alien, who always watches her, to let her be a doctor. As she and Viglar grows closer, Madison worries that she’s falling in love with one of the aliens who caused her brother’s disappearance—an alien who does not know how to love…

Alien Resistance takes place on an earth conquered by green-skinned alien invaders. Let’s stop there and get the serious part of my review out of the way. The blurb says “In a bleak future where government systems are breaking down and poverty and violence reign”. Why are government systems breaking down? Because this seems to have left earth ripe for the picking. One of the things that comes up is that in the future earth of Alien Resistance, doctors are spending fewer years studying to be a doctor than they had in the past. Along with the poverty and violence, I thought this was one of the most disturbing suppositions in the book, as I would assume it is part of an overall trend, fictionally speaking. But the reason it is disturbing is because I see similar things happening in our world now. That is really not a subject for a book review blog, but it is one of the things that made me connect with this book.

But let’s switch to the lighter side of the book. Alien Resistance is a romance, full of humor and quite a few heartwarmers. One of the conquerors, Viglar, faces off against one of the conquered, Madison. Much to Viglar’s frustration and the reader’s enjoyment, Madison refused to acknowledge being conquered. In the meantime, the conquerors, while quick to enforce their absolute dominion, are also not immune to harsher side of life on earth and are working to improve it. Aliens on earth is a scifi trope that always intrigues me and this green, hard-bodied alien domination is a fun interpretation of it.

The Zyrgin are supposed to be intelligent and have invested effort into studying humans. But no matter how much he may have studied humans, Viglar often does not understand what Madison says, often leading to humor. As Madison said, “It’s a saying, and how come an intelligent guy like you thought a human could have kittens?”

This alien ignorance of humanity carries over into perceiving human emotions and customs. Which was just a frustrating for me as a reader as it was for Madison as a character. Then again, maybe those aliens are not that ignorant after all, just extremely stubborn and see no reason to get along with the puny humans – they are the conquerors. They do not have to be nice at all.

Then, all of a sudden, Viglar throws in something that belies this stubbornness by throwing in a Star Wars reference at a completely appropriate time.

Madison hid a smile against his chest. His earnestness was rather endearing. “I will seduce you to the dark side.”

“The force is strong in this one. You will not seduce him to the dark side.”

Madison nearly fell off the couch. She stared at him with her mouth inelegantly open. “How on earth do you know Star Wars?”

Madison is often stunned by Viglar’s intelligence, and in this case, wit. I love these little bits of interactions between Madison and Viglar.

The fact is, the Viglar and his kind are intractable, dominating aliens who do not hesitate to use violence to bring humanity in line. This attitude appears to conflict with their apparent altruistic efforts to help the under-privileged humans by building hospitals and orphanages and who know what else? What is their end-game?  I found my lack of understanding of Zyrgin motives a bit distracting from time to time.  But I did not need that understanding to appreciate the story of Madison and Viglar.

Alien Resistance is the first book in the Zyrgin Warrior series that I have read, so I can assure you it stands on its own. While reading books 1-3 might give a little additional insight into some of the less important characters, it is not necessary to enjoy book 4. If you like a hardheaded alien hero, a headstrong human heroine combined with heart and humor, I recommend Alien Resistance.

The author provided a copy of her book so that I could bring you this honest review.

Purchase Alien Resistance or other books from the Zyrgin Warriors series: