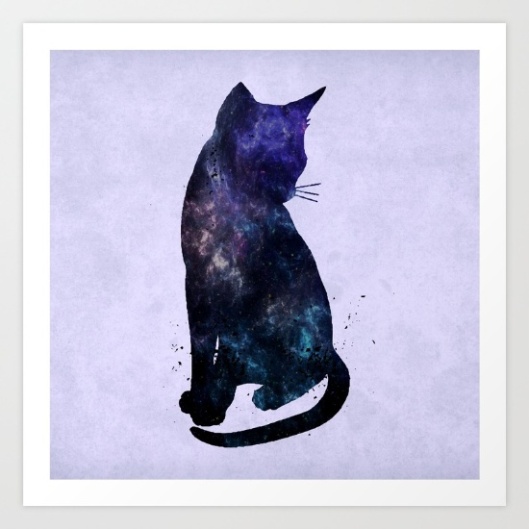 Since, on Tuesday, I featured Pets In Space, I figured Galactic Cat fits right in this week.

Currently I am reading Tainted Bride, the first book a new series by A.S. Fenichel.  I’ll probably finish it before the weekend is up, so then it will be on to The Masked City by Genevieve Cogman, book two in The Invisible Library series.  Earlier this year, I read book 1 and it became an instant favorite, so I have high hopes for book two. 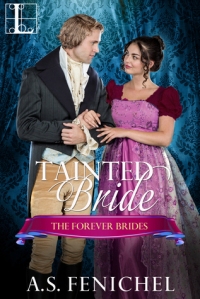 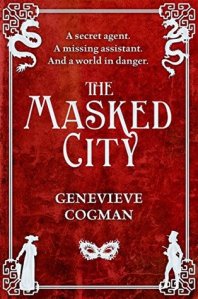 Today I am featuring a new book by the author of Enemy Within, Marcella Burnard. As one of many Scifi Romance readers who enjoyed the Enemy series, I am intrigued by her new paranormal romance series. What do you think of this cover? 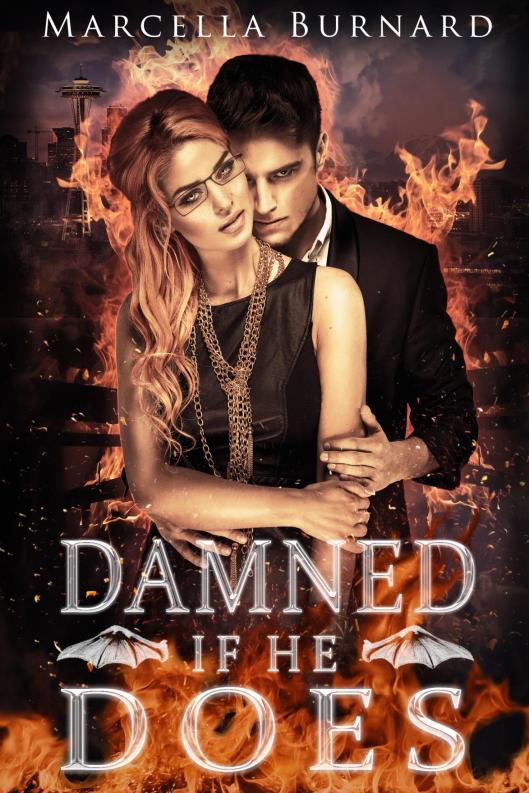 About Damned if He Does

Rejected by heaven, twisted by hell, what’s a damned dead man to do when he stumbles upon a life and love worth fighting for?

Though damned for his earthly sins, Darsorin Incarri likes being an incubus. Prowling women’s dreams to siphon off their sexual energy for Satan’s consumption has its perks: an array of infernal power and a modicum of freedom. Sure, Ole Scratch holds Dar’s soul in thrall, and Dar has to spend a few hours recharging in Hell every day, but it could be much worse. All he has to do is hold up his end of his damnation contract – five women seduced, satisfied and siphoned per night for eternity. So when he encounters gorgeous, bright, and funny Fiona Renee, it’s business as usual. Deploy the infernal charm and rack up another score. Except it doesn’t work. She’s immune. He has to find out what’s gone wrong or face Lucifer’s wrath.

Fiona Renee has the life she’d always wanted: a career, a home, a cat with a bad attitude, and peace. Fiona’s dated. Had boyfriends. And hated every minute of it. She’s reconciled to being lonely. So when a man shows up in her bedroom in the middle of the night demanding to know why her dreams turn to nightmares every time he tries to seduce her from within them, Fiona winds up negotiating a contract with a demon that allows him access to her life. She never anticipated that it would also give him access to her heart. If she’s going to fall in love at all, something she never thought would happen, shouldn’t it be with someone who’s alive? If Fiona wants to hang on to Darsorin, she has to find his true name—the one he’d been given at his birth over a thousand years ago. But Satan, himself, stands in her way. Even if Fiona can dodge Lucifer, she and Darsorin have to face the question neither of them can answer: What happens to a dead man if you manage to wrest his soul from the Devil?

Excerpt from Damned if He Does

The problem with being damned was that no one would meet your eye.

Darsorin Incarri squared his shoulders and glanced into the faces of the people passing him on the sidewalk. They’d look one another in the eye. Smile. Say, ‘good morning.’ But for someone whose soul had been claimed by the Devil? Nothing.

People would try. There’d be a split second of eye contact, then, as if the varied torments of Hell were somehow reflected in his eyes, their gazes would run away. Every time.

Shivering in the May sunshine, he shoved his clenched fists into the pockets of his black leather jacket. A single crumb of human warmth that wasn’t infernally compelled, surely that shouldn’t be too much to ask. Even for a damned soul.
He pushed through the door of a tiny drug store around the corner from his office and trudged to the pharmacy in the back.

“May I help you?” The pharmacist wore her strawberry blonde hair pulled into a swinging ponytail. Her name tag said ‘Fiona.’ Glasses, thick jade frames and barely-there lenses, heightened the olive of her eyes and magnified the smoky eyeliner and shadow she wore. Lush, full lips, painted clear pink smiled at him.

She met his gaze firmly.

No hint of nervous energy.

He pulled in a slow breath. The woman of his dreams–dreams he didn’t know he had, because Hell has a way of grinding those right out of a damned soul–and here he was picking up itch cream for his boss.

She turned away to leaf through the white prescription bags before turning back armed with one of them. “Here we go. Have you used this medication before?”

Her white coat washed out her pale complexion, but the lavender silk collar of her blouse, peeking from beneath the coat, caught his imagination. The silk must be worshipping the curves her abomination of a coat all but eradicated.

He sucked a breath in between clenched teeth as his body hardened. Game on. Another soul to seduce for Ole Scratch.

Without conscious thought, he hit her with sex magic. Marking her. Warning off rivals, and maybe, tipping her off, too, so they could both revel in the anticipation. Lust spiked all around him in the cramped, back corner of the drug store where three other women and one man, thin enough to blow away in a breeze, perched on hard plastic chairs, waiting for their prescriptions. He breathed it in, tasting, confused. None of it seemed to emanate from the young woman he held in his predatory crosshairs. She radiated friendly warmth, not insatiable desire like the rest of the females within ten feet of him–like she should.

He latched onto the desire surging around him. Three women. Three separate threads of want. All for the taking. Their want fed him, spilling into the empty space where his forfeited soul should have been. While he wanted the pharmacist, he’d been presented with a buffet of feminine sexual drive, he sampled the offerings. Longing was heady, addicting stuff. The unfulfilled yearning plunked into the dark well of him, tantalizing him with the sensation that he could be filled up, that he could feel almost human again. Briefly.

He smiled and sucked harder on the women’s dissatisfaction and burgeoning appetite.

“Mr. Sieffer? Sir, have you used this medication before?” the pharmacist repeated, her voice clear and alluring as a shot of the smoothest whiskey.

“For eternity,” he said. Why wasn’t she inarticulate with need?

Her smile fell and she leaned closer, lowering her voice. Captivated, he mirrored her until he could have pretended to lose his balance and have their lips meet over the middle of the counter. He caught the faintest hint of perfume. Rose and jasmine. Hunger he hadn’t experienced in centuries spiked his blood–different from his soul-bound compulsion to service as many women as possible in the name of Hell. This delectable morsel kindled the lecherous nature that had damned him in the first place. He could consume her. His mouth watered. He would.

Drunk with wanting her, he downed another shot of the unrequited desire he’d tapped from the other women.

“Certain STDs can be difficult to control, but this ointment should give you some relief from the pain and itch . . .”

Sympathy, cool, blessed sympathy, smacked him in the face like a dead fish. What she’d said–what she thought–registered. He jerked upright.

“Believe me,” he said, vitally aware that his voice had dropped just like every ounce of blood in his body had. “This is better than the snake oil and wormwood he’s been using for the past thousand years.”

Oh, that didn’t sound weird. Or like he had a gay lover. He closed his eyes. Smooth, Incubus. Real smooth. What the hell had happened to his ironclad contract that assured he’d always be supernaturally sexy? Every woman’s dream?

Enter to win one of 3 copies of Damned if He Does:

Add Damned if He Does to your Goodreads shelf:

Purchase Damned if He Does: 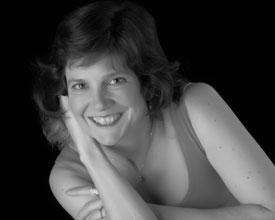 Marcella Burnard graduated from Cornish College of the Arts with a degree in acting. She writes science fiction romance for Berkley Sensation. Her first book, Enemy Within won the Romantic Times Reviewer’s Choice award for Best Futuristic of 2010. The second book in the series, Enemy Games, released on May 3, 2011. An erotica novella, Enemy Mine, set in the same world as the novels was released as an e-special edition by Berkley in April 2012. Emissary, a sword and sorcery short story released in the two volume Thunder on the Battlefield Anthology in the second half of 2013. Nightmare Ink, an Urban Fantasy novel from Intermix came out in April of 2014 and the second in that Living Ink series, Bound by Ink, came out in November 2014. Damned If He Does, a light paranormal romance came out in July 2016.

She lives aboard a sailboat in Seattle where she and her husband are outnumbered by cats. 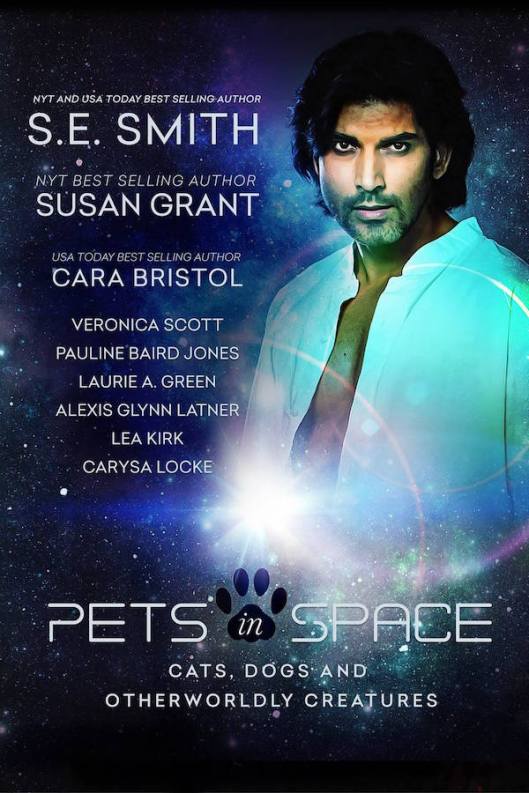 Pets in Space is coming soon.  With a release date of 10/11, the excitement is rising!  Here is a new trailer to pique your interest:

I love the little Astro-Pup!

But maybe you are not a video person. Are you one of those people who prefer the written word? Perhaps you would be interested in this free first chapter sampler of the Pets in Space anthology:

Next week, I’ll have an interview with Pets in Space authors. I hope you will come back and check it out!

About Pets in Space

Even an alien needs a pet…

Join the adventure as nine pet loving sci-fi romance authors take you out of this world and pull you into their action-packed stories filled with suspense, laughter, and romance. The alien pets have an agenda that will capture the hearts of those they touch. Follow along as they work side by side to help stop a genetically-engineered creature from destroying the Earth to finding a lost dragon; life is never the same after their pets decide to get involved. Can the animals win the day or will the stars shine just a little less brightly?

New York Times, USA TODAY, Award Winning, and Bestselling authors have nine original, never-released stories that will capture your imagination and help a worthy charity. Come join us as we take you on nine amazing adventures that will change the way you look at your pet!

10% of profits from the first month go to Hero-Dogs.org. Hero Dogs raises and trains service dogs and places them free of charge with US Veterans to improve quality of life and restore independence.