Honor & Roses by Elizabeth Cole. With no actual face revealed, the image of the heroine, Lady Cecily, looking over a garden gate toward, not a garden, but an entire countryside, one gets an idea of the honor of the Lady and that she takes her responsibilities to heart.  Cover design by James T. Egan. 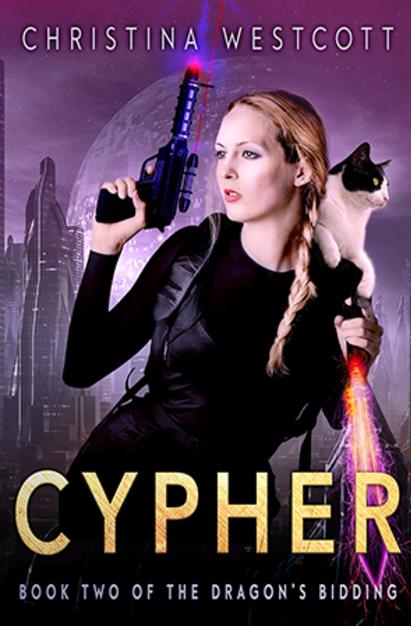 Cypher by Christina Westcott.  Lets start with the background.  Very scifi.  The planet silhouette and the futuristic architecture.  Now to the main feature.  The heroine, Kimber Fitzwarren, fully armed and ready for anything.  And when I say fully armed, I mean she is carrying her cat Jumper.

This weekend I’m reading The Burning Page by Genevieve Cogman.  This book is #3 in a series I have thoroughly enjoyed this year – The Invisible Library – which also includes The Invisible Library and The Masked City.  Dragons, alternate worlds, werewolves, fae, magic, intrigue and plenty of epic adventures.  And, of course, a librarian.  Make that a librarian spy.  What more could you ask for? 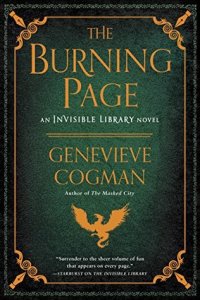 First they flew their mysterious sky craft through the skies of Barit. Then they started attacking. Finally, they began to raid.

Garek’s one year of duty as a guard walking the walls of Garamundo was extended to two when the sky raiders appeared. Two long years away from home and his lover, Taya. When he finally returns, the town is empty. While Garek was protecting Garamundo, the sky raiders were taking their victims from his hometown.

Taya can’t bear looking into the night sky. All she can see is Barit, her home planet. Impossibly, the sky raiders have brought her and their other victims to Shadow, the planet that shadows her own, and looking up makes her aware of everything she’s lost. Garek is out there somewhere. She knows he’ll look, but he’ll never find her.

She and the other captives have to find a way to escape. Without the food and clothes the sky raiders bring them from their raids on Barit, they’ll starve on the almost barren wastes of Shadow. And when they’ve given the sky raiders enough of what they want, that’s exactly what the sky raiders will leave them to do.

What Taya doesn’t realize is she’ll have some help with her plan. Because Garek isn’t giving up on finding her. And he’s even more resourceful than she could ever have imagined.

Nothing is going to keep him from Taya. Not even space itself.

A new book from a favorite author is always exciting.  A new book in a brand new series – even better!

In Sky Raiders, Michelle Diener has crafted a wonderful new world – Barit.  The descriptions of walled cities, liege-based political divisions, farmers and crafters gives Barit a medieval feeling.  The sky raiders are just so out of place.  To the pre-industrial humans, the sky raiders with their flying ships and white lighting are powerful, mystical, and dangerous.

But there is something powerful, mystical and dangerous about some of the inhabitants of Barit.  Some have the ability to call the ‘Change’.  The ability to manipulate certain elements.  Air, water, earth.  That the low tech-talent is a threat to the technologically advanced sky raiders is not only ironic, but by redefining the balance between the adversaries, it is just.

Garek is one that can call the Change and he may be the one of the most powerful when he calls it.  This makes his life more complicated than he wants it to be.  It got him an extra year of conscripted service to Garamundo when all he wanted was to be with his love Taya.  While he was gone, Taya, along with many others, was taken by the sky raiders and now, all Garek wants is to find her and rescue her.

The romance of Garek and Taya began before the time of the book, so you don’t see that development except through memories of the characters.  But Taya and Garek are truly in love and will do anything to find each other.  They just happen to have a lot of other people along for the ride.  The lack of a developing romance did not bother me at all.  The well-established romance left room for the author to develop other aspects of the story: the setting, the people, the conflict.

The story of Sky Raiders is told from both Garek’s and Taya’s viewpoint, alternating between Garek’s heroic efforts to find and rescue her and Taya’s equally heroic struggle to escape from the sky raiders who are using their captives as slave labor.

The sky raiders need the slave labor because there is something they want but they cannot survive in the atmosphere of Barit or it’s sister world Shadow. When on planet, a raider must wear an awkward robotic suit.  Even their equipment breaks down quickly in the atmosphere.  This seems to be an extreme disadvantage, but typical of any technologically advanced society, they have the required arrogance needed to make them believe they can handle the disadvantages.

In addition to the struggle with the sky raiders, the people of Barit have their own problems to deal with.  It seems like a threat from the stars might unite all people to defend their world.  Not so on Barit.  The feudal-like system they live under works well as long as the lieges are strong and are able to command their people’s loyalty.  Power struggles among the lieges add to the problems the people of Barit must deal with.  One of the key characters, Aiden, is the heir apparent to one of the lieges.  His position is both a complication and an asset during the rescue of the people stolen by the sky raiders.  I like Aiden.  He added humor, perspective and some interesting facets to the tale.

There are also different races.  The Illy are the main race.  The sky raiders have enslaved Illy and Kardanx.  There are two major differences between these peoples.  The Kardanx have, in effect, bred out the Change ability, using cruel and bloody methods.  The second difference is in how they treat their women and that difference will cause conflicts between the Illy and Kardanx.

Among the Illy, strong women, like Taya, are not unusual.   And cultures that don’t treat women as equal or as less important than men, such as the Kardanx, are depicted as less than enlightened.  A secondary character, Min, the half-breed Kardanx-Illy, was generally as tough as Taya, and did not let any Kardanx get to her even though she feared them. The desirability of a strong woman as a leader is a theme that recurs several times.

The world that Michelle Diener has created in Sky Raiders is gratifyingly complex.  But it is not just the world of the Illy and Barit.  The sky raiders are out there in space.  What do they want?  And are there more of them?  There is so much going on this this book, you will find plenty to keep the pages turning.  The end was satisfying, while letting you know there is much more to the story.  I’ll be looking forward to the next chapter.

The author provided a copy of this book in exchange for an honest review.

About Nine of Stars

Winter has always been a deadly season in Temperance, but this time, there’s more to fear than just the cold…

As the daughter of an alchemist, Petra Dee has faced all manner of occult horrors—especially since her arrival in the small town of Temperance, Wyoming. But she can’t explain the creature now stalking the backcountry of Yellowstone, butchering wolves and leaving only their skins behind in the snow. Rumors surface of the return of Skinflint Jack, a nineteenth-century wraith that kills in fulfillment of an ancient bargain.

The new sheriff in town, Owen Rutherford, isn’t helping matters. He’s a dangerously haunted man on the trail of both an unsolved case and a fresh kill—a bizarre murder leading him right to Petra’s partner Gabriel. And while Gabe once had little to fear from the mortal world, he’s all too human now. This time, when violence hits close to home, there are no magical solutions.

It’s up to Petra and her coyote sidekick Sig to get ahead of both Owen and the unnatural being hunting them all—before the trail turns deathly cold.

Excerpt from Nine of Stars

The surface of the water churned. At first Gabe thought it was the wind, swirling around loose chunks of slush. But bubbles seethed from the interior, pushing through the gold algae.

He reached for his rifle and pressed it to his shoulder. He aimed it at the water, sighting down to see a black mass rushing upward, breaking the surface in a hail of spattered slush. Crowned in antlers, the creature glittered with ice, launching itself up into the daylight like a whale breaching the surface of the ocean.

Instinctively, Gabe blew out his breath and pulled the trigger. He fired once, twice, intending to put the creature back down in the water. His rifle jolted his shoulder with each shot, and he knew he’d hit the creature dead in its center of mass.

But the shadow leapt up onto the bank, dripping, crouching. It was the shape of a man, with antlers crowning its head. It looked upon Gabe through the skull of a stag, pale and ferocious . . . and it stood up. In one hand, it gripped the golden coin Gabe had cast into the water. A fistful of bone-pale knives dripped from the other.

Gabe ratcheted back the slide on his rifle and fired again. The creature didn’t flinch. It was as if the soaking pelts of its cloak simply sucked them in.

Petra was shooting at it, too, with no better results. She was shouting at Sig to get behind her.

Gabe kept firing, backing away to the snowmobiles. He had known that Skinflint Jack was a fearsome creature, but he suspected that Jack could be hurt. He’d guessed wrong.

Jack lowered his head and made a run at Gabe. Gabe dove away, but not before the darkness of Jack’s cloak slapped him in the side of the face. It was like being slapped by the abyss—cold, stunning hell. An antler caught Gabe in the shoulder and he tumbled, ass over teakettle, into a snowdrift.

He rolled over in the snow, the shadow looming over him.

“Hey, you! Cthulhu wannabe! Look what I got.”

Jack turned. Petra was holding two glittering gold coins in her hand. She made sure that he’d seen her. He took two steps away from Gabe, toward her . . .

. . . and she pitched the coins as far as she could, into the snowy waste. The pair of them shone like falling stars on the way down.

But he growled and scuttled after the coins.

Gabe climbed onto his snowmobile and cranked the engine. Petra and Sig had already climbed aboard theirs and gotten the engine going. He followed Petra to a hasty retreat up the valley. Behind him, he watched the dark figure in the snowfield sifting through the snow with his hands.

That had been a disaster.

But they sure as hell had managed to get Skinflint Jack’s attention, for good or ill.

Add Nine of Stars to your Goodreads shelf:

Laura Bickle grew up in rural Ohio, reading entirely too many comic books out loud to her favorite Wonder Woman doll. After graduating with an MA in Sociology-Criminology from Ohio State University and an MLIS in Library Science from the University of Wisconsin-Milwaukee, she patrolled the stacks at the public library and worked with data systems in criminal justice. She now dreams up stories about the monsters under the stairs. Her work has been included in the ALA’s Amelia Bloomer Project 2013 reading list and the State Library of Ohio’s Choose to Read Ohio reading list for 2015-2016.