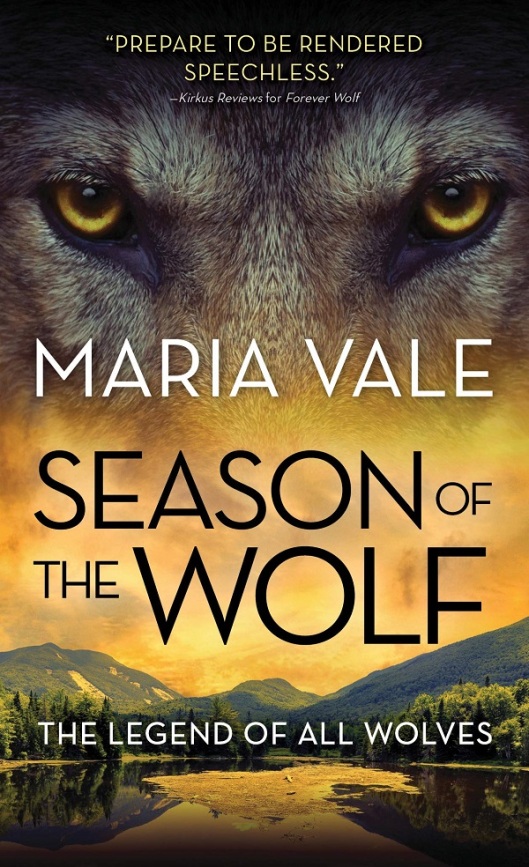 About Season of the Wolf by Maria Vale

In a world of danger and uncertainty, the Alpha has enough to worry about without him…

For Alpha Evie Kitwanasdottir, things are never easy. The Great North Pack has just survived a deadly attack. Evie is determined to do whatever is necessary to keep her Pack safe, especially from the four Shifters who are their prisoners.

Constantine lost his parents and his humanity on the same devastating day. He has been a thoughtless killer ever since. When Constantine is moved to live under Evie’s watchful eye, he discovers that taking directions and having a purpose are not the same thing.

Each moment spent together brings new revelations to Constantine, who begins to understand the loneliness of being Alpha. He finds strength and direction in helping Evie, but there is no room for a small love in the Pack, so Constantine must work harder than ever to prove to Evie he is capable of a love big enough for the Great North Pack itself.

Review of Season of the Wolf

The Legend of All Wolves is still my favorite wolf/werewolf/shifter series.  From the beginning of the series, I have admired the unique take on the wolves that can wear skin. Season of the Wolf focuses on two characters.  Evie, the pack Alpha, and Constantine, a shifter that got caught up the battle between the pack and the shifters.

For series newbies, shifters are those that can shift at will, or not at all.  They live mostly among humans and share no kinship with the wolves.  Wolves are those that must shift with the full moon and often choose to be wolves at other times.  The Great North Pack of this story lives on their own terms, wild and free, on their own land.

Because Constantine is an outsider, attempting to become a part of the pack, we get a glimpse into what it really means to be a part of a pack.  Humanity’s selfishness and deceit that is a part of Constantine must be set aside.  He will also need to sense the world like a wolf.

While I think that not all humans are that imperceptive, many animals certainly do seem to have a supernatural sense about the world around them.  This is an important part of the wolf community that Evie understands and Constantine must learn. And as Constantine learns from Evie, Evie will, inevitably, learn from Constantine.

I would classify this book a romance, but is it certainly unique in it’s approach to this unusual pair of characters and how they become close.

Interwoven into the tale of of Evie and Constantine is the constant threat of the outside world.  Especially the shifters. This struggle to maintain their wolf community holds the series together.

I would recommend reading this series in order so that you can get an understanding of the Great North Pack, pack dynamics and some of the great individual characters.  Besides, it truly is a great series.

Add Season of the Wolf to your Goodreads shelf:

Purchase Season of the Wolf: 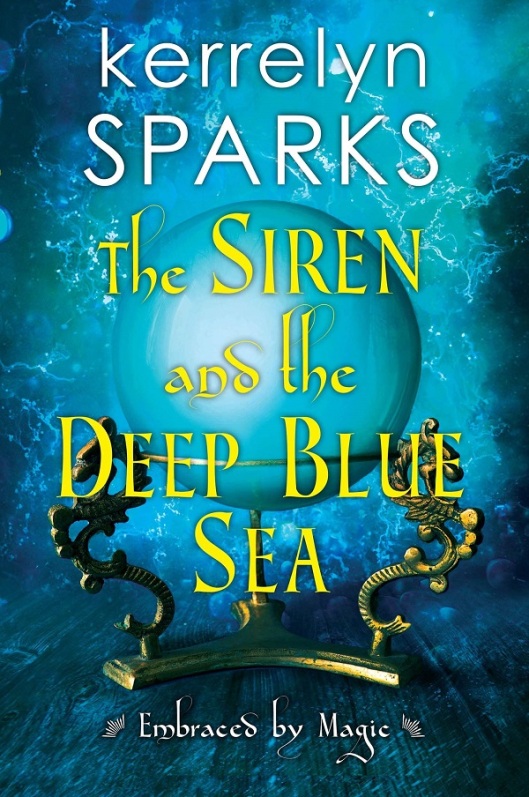 About The Siren and the Deep Blue Sea by Kerrelyn Sparks

Raised on the magic-seeped Isle of Moon, Maeve is used to unusual powers—and the way they fuel the politics of her world. But when she discovers an ability to shape-shift at will, she knows who she wants to share it with first. Brody, the enigmatic, infuriating shifter-spy has always made time for Maeve. But it’s been almost two months since she’s seen him. And though no one else believes Brody is in danger, Maeve is more than ready to rescue him herself.

The rumors Brody’s investigating are terrifying: a secret army of magic-users, in the service of the cruel Circle of Five. But when he uncovers the identity of one of the Five, the mission becomes personal. Cursed as a boy by the Sea Witch, Brody can spend only two hours a day in his human form, a restriction that limits his future and muzzles his heart. Plus Maeve teases him for being such a pretty doggy instead of appreciating his manly charms. To win his freedom, he must take on a terrible disguise. And when Maeve finds out, she’ll unleash a tempest like no other . .

Review of The Siren and the Deep Blue Sea

Because this is the story of sister number 5 in the two series The Embraced and Embraced by Magic, there are many characters.  Readers of the series will appreciate the appearance of all their old favorites. If you are new to the series, don’t worry.  There is enough back story presented to keep you in the story.  I have not read all the books but had no problem getting into this one.

Because there are so many characters and because they start the story in several different places, there is a lot of ‘catching up’ as each one gets into the adventure.  I.e., certain aspects of the plot were repeated.  I did find this to be a little tedious.

However, I found the rest of the tale to be enchanting.  Maeve is a princess to cheer for and Brody is the hero to applaud!  At first it seems they cannot be together, but don’t worry.  This is a romance after all!  The fun is in the solution.  Maeve’s unknown heritage and Brody’s secret birthright were surprising and delightful.

I really enjoyed the secondary characters of Nevis and Elinor who bring humor to the story along with their steadfast support of Maeve and Brody.

The Siren and the Deep Blue Sea is a fairy tale told with so much beautiful imagery, distinctive characters and wild adventures.  It can be read as a stand alone or as part of the The Embraced and Embraced by Magic series.

Add The Siren and the Deep Blue Sea to your Goodreads shelf:

Pre-order The Siren and the Deep Blue Sea (Releases August 25): 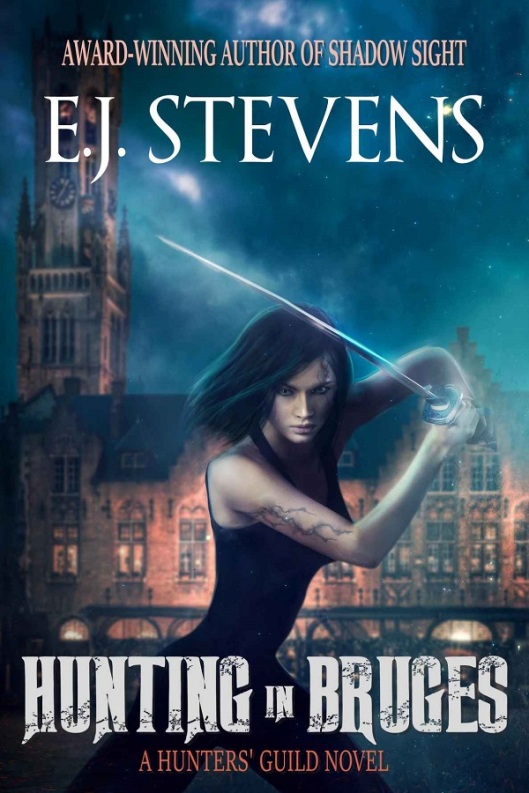 About Hunting in Bruges by E.J. Stevens

The only thing worse than being a Hunter in the fae-ridden city of Harborsmouth, is hunting vamps in Bruges.

Being shipped off to Belgium sucks. The medieval city of Bruges is quaint, but the local Hunters’ Guild is understaffed, the canals are choked with dead bodies, and there’s no shortage of supernatural predators as likely suspects. On second thought, maybe Bruges isn’t so bad after all. With a desire to prove herself, protect the innocent, and advance within the ranks of the Hunters’ Guild, Jenna Lehane hits the cobbled streets of Bruges with blades at the ready. Someone, or something, is murdering tourists and dumping their bodies in the city’s scenic canals.

With the help of a mysterious stranger, Jenna begins to piece together clues that are dotted throughout the city like blood spatter. Determined to stop the killings, Jenna delves into a bloody local history that only raises more questions–but some secrets are best left buried. Jenna must put her combat training to the test as she struggles to unearth the truth about an ancient enemy. Hunting in Bruges is the first novel in the Hunters’ Guild urban fantasy series set in the award-winning world of Ivy Granger.

Review of Hunting in Bruges

5 stars for the narration and for the story. Two narrators, Melanie A. Mason and Anthony Bowling, do a wonderful job of bringing this story to life. Having listened to more than one book from E.J. Stevens and this narration team, I am ready to listen to the next book!

But before that, I should talk about this book.  Bruges, a city I know next to nothing about, is the colorful location for this paranormal mystery.  Full of ghost, ghouls, vampires and many other supernatural creatures, there is no lack of action for our valiant Hunter and her friends.  Ivy Granger readers might recognize Jenna LeHane.  In Hunting in Bruges, Jenna is the star.

Several secondary characters add depth, humor and motivation to the story.  Jenna’s mysterious stranger (as mentioned in the book blurb) is totally charming and certainly adds a light-hearted tone to an otherwise dire situation.  The overall story has a resolution but also sets the reader up for the ongoing story of the war with the supernaturals.

Thanks to the author who gave away some audiobooks.  I was please to get this one!  My review is my honest opinion.

Add Hunting in Bruges to your Goodreads shelf: