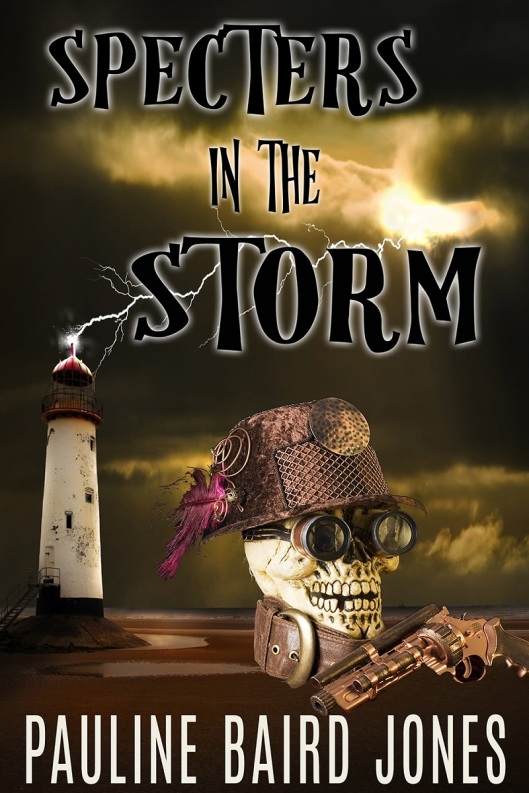 About Specters in the Storm

Dr. Ernest Warren is done with love. Losing his wife in the Great Storm of 1901 left him with questions only science and interstellar travel can answer. When disturbing storms begin to brew again, he reluctantly turns his airship back to where he lost his love in hopes of finding answers.

Prudence Pinkerton has been following Ernest’s multi-dimensional career from the future and knows she has to meet him.

When he reluctantly accepts her help, Prudence doesn’t waste time. She knows time is running out and the world is on the cusp of life-altering change.

Prudence must overcome his distrust of her if they are to save Earth from the evil hiding in the heart of the storm.

Review of Specters in the Storm

Steampunk, romance, adventure and horror. And cross-dimensional time travel. Anything can happen in this type of setting.

When the time traveller is Prudence Pinkerton, who has made this trip before, you’d think she would know exactly what was going on.  But she is in for a few surprises.  I liked that Prudence thought about previous iterations, but the book didn’t actually go back to those iterations.  I also liked that Prudence, despite having experienced certain aspects of the situation before, is still full of hope.  Oh, not so much hope that realism is out the door, but enough to make her happy.

I loved the character of Ernest – he seems kind of wishy-washy until he doesn’t.  He is a scientist wanting to study the storm that seems to be following him.  It’s oddity is quite disturbing – not at all scientific.  But even more disturbing are the faces in the storm.

When Prudence’s familiar, an octopus named Octavius, rescues Ernest and his airship The Weatherman, the heroine and hero meet and eventually make their way to the eerie lighthouse (did you notice it on the cover?).  Things are going to get really stormy!

Automotons. Cool, or eerily evil?  I thought they were creepy right up until, I learned if they were good or evil.  Even after that, they remained creepy. The Storm is another character all by itself.  Is it the end of the world? And what are these Specters in the Storm? The word ‘creepy’ also applies to the specters by the way.

The author’s vivid descriptions of the storm, lightning, specters and the evil being that resides in the storm give this tale a real horror story feel.  The horror and dimensional time travel aspects of the story remind me a bit of Baird’s Steampunked.  Specters in the Storm is a stand alone story though and it was well worth spending a few hours out in the elements!

Add Specters in the Storm to your Goodreads shelf:

Purchase Specters in the Storm: 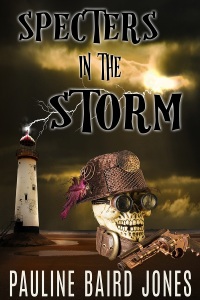