Continuing a series of giveaways, the timing for this go round results in a special treat between two holidays for a couple of lucky winners. 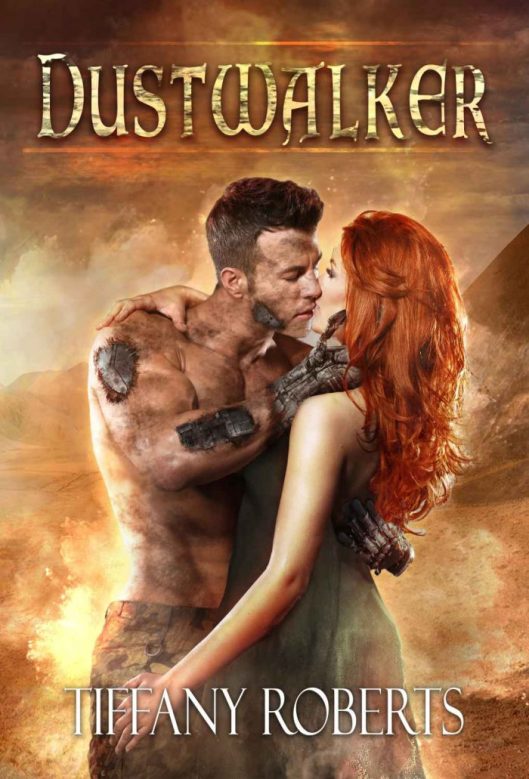 Lee Koven is offering like-new copies of Tiffany Roberts’ Dustwalker and Bec McMaster’s Nobody’s Hero (Burned Lands, #1).  I loved both of these books. Both books are SFR Galaxy Award winners.  As a matter of fact, Nobody’s Hero won two awards (selected by both Lee and myself).  Lee has such good taste in books. 🙂  I think you will agree!

Both of these books have had cover changes since their award.  Not that they needed it.  New covers are presented here for your perusal.

For those that are interested, here are the original covers.  Personally, I like them  better.  I think it is because I read them under these older covers, so I have an emotional tie to them.  Which cover(s) do you like?

The second prize in the giveaway will be an MP3 audiobook of Amanda Quick’s The Mystery Woman (The Lades of Lantern Street, #2).  Historical mystery and romance from Ms. Quick is always a winner! 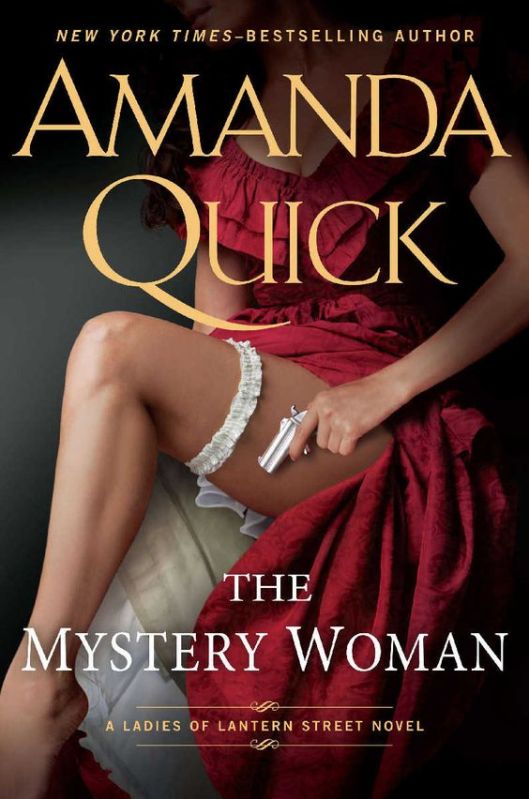 Click on the link to enter the giveaway.  There are three options that say ‘Invent your own option.”, but I’ve already done the inventing.  Just select them and respond.  In addition to the Rafflecopter entries, comments on blog posts between now and December 3 will also count as an entry.

Good luck to everyone!

Not much risk to enter. These prizes are gently used goods, so there is no guarantee of condition.

If you win, you will be contacted and asked to provide a mailing address. It must be a US or Canada address. Sorry about that, but the costs of mailing elsewhere are pretty prohibitive.

Speaking of mailing, we are at the mercy of the post office. Delivery is as expected for anything you yourself would mail. So, pretty good, natural disasters not withstanding. I trust the US post office.

Winners will be announced on the original contest blog post. So, if you win, expect to see your name in print.

You are responsible for any tax implications your prize may incur. I am going to say none, but I won’t guarantee it. You are on your own.

I am going to try something new on WWMB today and for the next few months.  A monthly giveaway.

This all started when I was contacted by my friend Lee Koven.  Lee is a fellow SFR Galaxy Awards judge and once she joined me for a joint interview with a favorite author, Bec McMaster.  We have very similar taste in great books! 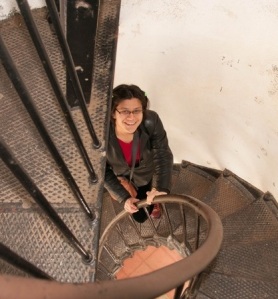 Lee loves to explore cultural, technological, and human possibilities, so she also loves to read and discuss science fiction romance. Her other hobbies include music composition, playing and making video games, and writing. A computer programmer and server admin by trade, Lee resides near Boston with her partner and many robots.

Lee likes print books but once she has read them, loves to share them.  So she asked if I wanted to do a monthly giveaway for her like-new and gently used books that a Whiskey With My Book follower might enjoy.  Sound good?  Yes!

For each giveaway, I will be adding an MP3 audiobook to the prizes to be won.  So put down your e-reader, walk away and cross your fingers.  There will be one print book winner and one audiobook winner.  The contest will be open for two weeks.  Feel free to share with your friends.

Due to postage costs, the contests will be open to folks with a US or Canada mailing address.

The first contest book is actually two Scifi Romance books: The Rule of Luck and The Chaos of Luck by Catherine Cerveny.  The Rule of Luck is the winner of two SFR Galaxay Awards. These are the first two books in what is so far a three book series, Felicia Sevigny.  I thought they were great (click on titles for my reviews), mostly because of the highly original plot!  The third book in the series, The Game of Luck was recently released and is on my TBR list.

The contest audiobook is Phantom Evil by Heather Graham.  Ms. Graham’s Krewe of Hunters books are a cool combination of contemporary mystery solved by traditional detectives and a bit of the paranormal.  Phantom Evil is actually the first book in the series.  I have read a few more Krewe books and found they are all standalone, no cliffhangers and each a very good story.  Great for Halloween season!

Add these books to your Goodreads shelf:

In case you don’t win, consider purchasing these books: 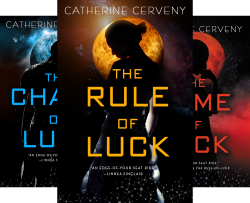 Note:  There are four chances to win, each is labeled ‘Invent Your Own Option’.  You don’t really have to invent anything.  I already did that.  Go ahead, give it a try!

Not much risk to enter. These prizes are gently used goods, so there is no guarantee of condition.

If you win, you will be contacted and asked to provide a mailing address. It must be a US or Canada address. Sorry about that, but the costs of mailing elsewhere are pretty prohibitive.

Speaking of mailing, we are at the mercy of the post office. Delivery is as expected for anything you yourself would mail. So, pretty good, natural disasters not withstanding. I trust the US post office.

Winners will be announced on the original contest blog post. So, if you win, expect to see your name in print.

You are responsible for any tax implications your prize may incur. I am going to say none, but I won’t guarantee it. You are on your own.

What do you do when you NORMALLY write books featuring Scottish heroes and heroines or Scottish dragons, and a Frenchman from the late 19th century screams in your head? This happened to me many years ago, about the time I was publishing books like My Honorable Highlander and Dragon in the Mist. I loved this paranormal romance because I set it in my adoptive state of North Carolina. My readers kept demanding more of the Highlanders and dragons, so it stayed hidden in a drawer (actually, on a flash drive).

A year ago, I set out to see if I could interest a publisher in Heaven-sent Warrior, mainly because I had an idea for a series called Warriors in Bronze. Did I mention I had made the heroine a modern woman of Scottish descent? The book has always had the same title and I am pleased that Lori Polito from Soul Mate Publishing listened to my pitch at the RWA Conference in Orlando, and asked to read the full story. She bought it, and the book was just released! Better yet, she has agreed to publish the 2nd book in the series: Heaven-sent Highlander. Coming soon!

Henrí Chevalier’s last memory, before stumbling naked into a museum’s moonlit garden, was Auguste Rodin and his dusty Paris studio in 1886. To escape his broken heart, Henrí volunteered to sleep inside a statue until needed. Expecting to die, he discovers he must learn to use the unexpected powers Heaven has given him. Without them he will fail his mission against otherworldly creatures, such as demons and faeries.

Kenzie Mackintosh, a dedicated art museum’s curator, spies a naked man hiding among bronze statues. A quick glance ignites desire within her, but she is too tied-up in work to act on it. Unaware of her fae heritage, their relationship heats up as he disrupts her job. While Henrí tries to process modern buildings, cars, and a broken elevator, a demon attacks and forces Henrí and Kenzie to enlist the aid of her powerful fae relatives. When the demon possesses the body of her ex-lover and threatens to kill him, then use her to take over the world, Henrí and Kenzie must learn to trust each other, even if Kenzie’s death might be the only answer to the world’s salvation.

Kenzie couldn’t get her mouth to work, but she knew the second Henrí had read her thoughts, because he nodded, then kissed her. She strove to be fearless and confident, but everything flew out the door when he slipped his tongue into her mouth. In the next two seconds, she’d either sink into his embrace and never stop kissing him back, or run.

“Stay with me tonight, mon ange,” he whispered.

He’d drawn his luscious mouth back a few inches, but his words sounded . . . familiar.

“It means my angel, since you have the look of the heavens in your lovely hair and exquisite eyes. You taste like ambrosia.”

“The mythical food of the gods?” she asked. She wanted to fan her face, but she’d locked her hands around Henrí’s neck.

“There is only one true God, mon ange.”

Kenzie nodded as her fingers tangled in his hair and pulled his mouth back down to hers. Anything to keep from considering the circumstances.

She withdrew, sucking in a breath. Circumstances? She had her tongue down a stranger’s throat after someone, whom Henrí called a demon, had nearly broken into her home. The feelings, sweeping her better judgment away, were foreign.

Henrí chuckled, then lifted her into his arms. At five feet ten inches, she was close to his height, but he didn’t so much as wheeze as he carried her to her bedroom. He lay down on the bed and snuggled up beside her, without taking his hands off her body.

What am I doing? This is wrong on so many levels.

Henrí’s head shot up, and his eyes darkened. His brows lowered, and he seemed angry. She pushed away the fear. He wouldn’t hurt her. He’d already saved her more than once.

“Serves you right,” she said, “because it’s not polite to listen to a person’s private thoughts.” She attempted to appear chagrined, but his suddenly guilty facial expression made her smile. How could he be angry with her? He lay on her bed, arms wrapped around her, making her body feel . . . great.

Purchase Heaven-sent Warrior from Amazon US:

Stop by my blog for a chance to WIN my Giveaway.
I call it HEAVEN-SENT WARRIOR … Clay, Candy & Love Notes
(no purchase necessary) https://nancyleebadger.blogspot.com/p/contests.html

Nancy Lee Badger grew up in Huntington on New York’s Long Island. After attending Plymouth State, in the White Mountains of New Hampshire, she earned a Bachelor of Science degree in Art Education and met and married her college sweetheart. They raised two handsome sons in New Hampshire and when the children had left the nest, and shoveling show became a chore, she retired from her satisfying job as a 9-1-1 Emergency Medical Dispatcher and moved with her husband to North Carolina, where she writes full-time.

Nancy is a member of Romance Writers of America, Heart of Carolina Romance Writers, Fantasy-Futuristic & Paranormal Romance Writers, and the Triangle Association of Freelancers. She loves to travel and attend Scottish Highland Games and is never far from her laptop. She finds story ideas in the most unusual places.