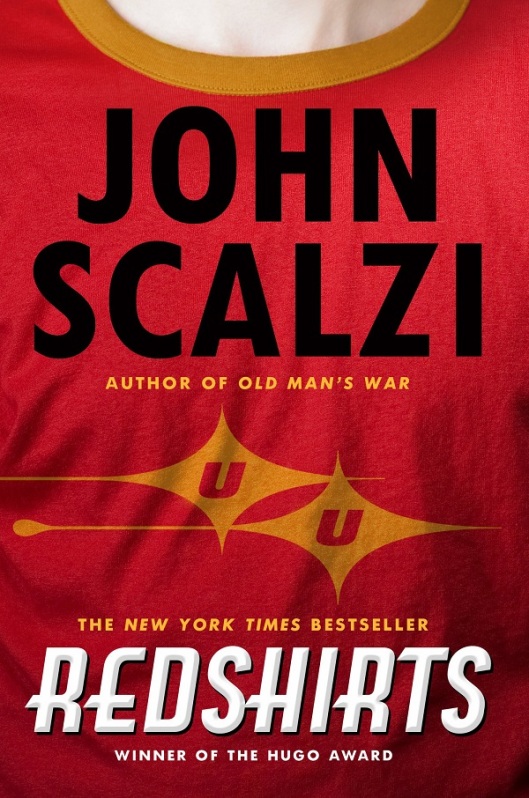 About Redshirts by John Scalzi

(1) every Away Mission involves some kind of lethal confrontation with alien forces
(2) the ship’s captain, its chief science officer, and the handsome Lieutenant Kerensky always survive these confrontations
(3) at least one low-ranked crew member is, sadly, always killed.

Not surprisingly, a great deal of energy below decks is expended on avoiding, at all costs, being assigned to an Away Mission. Then Andrew stumbles on information that completely transforms his and his colleagues’ understanding of what the starship Intrepid really is…and offers them a crazy, high-risk chance to save their own lives.

I’m just going to start out by saying that if you are not a Star Trek TOS fan, you are probably not going to get Redshirts. Well, maybe you will, but only if you read the entire book! If you a fan of the original series, you will immediately grasp the way of things.

TOS fans will latch onto the plotplot very soon into the book. I just made that compound word up: plotplot. It needed to be coined. Kind of like a plot within a plot, but more like a plot that is made up of a plot. Hmmph. Yeah, that did not make sense to me as I typed it, but it does make sense to me in terms of the story of Redshirts. All I can say is, read it. And feel free to use my new word.

Redshirts have a rep. I know it. You know it. Unless you are a chief, if you wear a red shirt, your life is on the line every time you step onto that transporter pad. Ensign Dahl is a redshirt. Or as they are called in the book – ensign.

Dahl quickly learns that other crew members are somewhat aware of their very precarious place on the Intrepid and have devised a system to make life just a little bit safer. This inspires the intrepid ensign to take his scientific curiosity and apply it to his life on (and off) the Intrepid.

As a nearly life-long fan of Star Trek, I loved the references to the characters, ships, missions and monsters of TOS. Finding and anticipating the parallels became a game, to see if I was right about who was who and what was what.

The ending postludes were amusing, but I actually think I could have done without them. Rather than add to the story, they actually told different stories – which were marginally interesting.

Star Trek TOS is both revered and ridiculed by fans all over. Redshirts is like a TOS fan, reverent of the show, but also poking much fun at the series. Mostly, poking fun. Can fans who only love and adore TOS appreciate this book? Doubtful. If you read Redshirts, bring your ability to laugh at this sacred icon of science fiction television.

My review copy came from the local public library.  I had to give it back after two weeks.  This review is my honest opinion.

Add Redshirts to your Goodreads shelf:

About Equinox by Tabitha Lord

After a brutal civil war, Almagest is finally at peace, but the larger battle isn’t over. Dr. Caeli Crys has been captured by the Drokarans, feared enemy of the Interplanetary Alliance, who plan to use her unique telepathic gifts for their own sinister purposes.

Captain Derek Markham and his elite team of operatives race after Caeli, but soon find themselves trapped behind enemy lines on an occupied world. Despite the mounting danger, Derek will stop at nothing to save the woman he loves.

As events spiral toward a conflict that will define the fate of the Alliance, the Horizon team will be pushed to the limits of their strength—and discover that the greatest threat of all may come from an enemy within.

Caeli and Derek still have so much to go through before they can relax and enjoy their life together. They find this out at the beginning of Equinox when Caeli is kidnapped by the Drokarans. When Derek and his team attempt to rescue Caeli, they learn some disturbing information. Their view of their own past is now completely upended. I like how this revelation sets off the rest of the story. There will be several more missions, lots of action, and lots of danger for the characters I have connected with in the first two books of the Horizon series.

When reading the final book of a series, I am always a little nervous. Will all the characters get a HEA? Will it even really end? Will the author wrap things up in a way that will have me saying – “That was good!”

The main thing I was looking for in the finale is the final part of the history of Almagest, which was revealed in pieces through old data files in the first 2 books. At the end of book 2, I was left to do some speculation and I can report I was pretty close on the origin of the Novali (the empaths) and the Drakorans (the physically stronger humans). I won’t say more because you will want to read that for yourself.

Beyond that, the final chapter of the Horizon series took me places I would never have imagined. It was not so much a wrap up as it was another story with a complex plot that just happens to end with no more questions. There was so much going on that the story seemed a bit rushed in places. I think the author could easily have added 50 pages and it would not have made the novel too long. On the other hand, the fast pace got me to the exciting conclusion quickly since I had a hard time putting my Kindle down.  And then I said “That was good!”

If you haven’t started the Horizon series, the first book, also called Horizon, can be purchased for the low price of $.99. This would be a great series to binge read! I highly recommend reading the series from the beginning.

Add Equinox to your Goodreads shelf:

Today is the day!  It is my 21st wedding anniversary.

My anniversary just happens to fall on the same day as the announcement of the 2018 SFR Galaxy Awards.  The awards are announced hourly starting at 10am EST.  Head over there if you want to see what has been awarded so far.  In the meantime, since my picks have been announced, I am pleased to present them here.  If any sound like something you must read, clicking on the book cover will take you to Amazon. 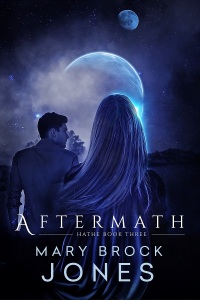 In Aftermath, the post war setting of Hathe and its people is a fascinating background. Because of the huge subterfuge the Hathe people pulled over on the Terrans (See books 1 and 2: Resistance and Pay the Piper), the Hathe population has become split between the population that stayed on Hathe and the rest of the population that escaped to the moon, Mathe, and hid there for the duration of the war. Known as the dirtsiders and the moonies, they are not re-integrating into the post-war world very well. The struggles between the two sides of the same people are often heartbreaking. Aftermath has a complex plot, engaging heroes and heroines, and disagreeable villains. The slow burning romance between Jacquel (the understated antihero of the first two books) and Rheia is satisfying. But their roles as revolutionaries in the post war situation are what makes this book a great read.

Raven, Fire and Ice (Touch of Truth, #1) by Nita Round

I do love steampunk and here is a new-to-me author that is serving up what I want. In Raven, Fire and Ice, Nita Round describes an airship that anyone would love to take a ride on. The airship is THE steampunk machine in this story that takes seems to take on a life of it’s own. Or maybe that life is due to the very able crew. The three main female characters, Lucinda Ravensburgh, who adds a bit of mysticism to the story, Magda Stoner, very capable airship captain, and Officer Ascara d’Jharaena ael Korphen (Officer Ascara for short), security officer, have a lovely flirtatious thing going. While their relationship does not reach the lovers stage they are clearly a very close group and I am anxiously awaiting the next book to see where they go.

Infinity was released in 2017, but I discovered Tabitha Lord’s Horizon series in 2018. The series spans multiple worlds all caught up in both their own struggles and otherworldly problems. The main world, Almagest, has a spotty history. By that I mean, much of the history is unknown, lost during war. However, it appears to be very important. In Infinity, some of Almagest’s history is starting to be revealed through computer logs. But not all, so I can theorize all I want about what’s what. Will my theories prove true? I’m waiting on the next book to find out. In addition to all the hidden history, Infinity includes Derek and Caeli, the hero and heroine from two different worlds who may be the key to saving everything.

Villains get a bad rap. Yet, they can make or break a story. You know I’m right. So let’s talk about the malefactor in Lost Valyr. Have I given away anything about the villain yet? Specifically, lets talk about Xaddek. So, a giant spider as a bad guy. Personally, I like spiders in my garden. But up close, they are creeeeepy. No two ways about it, Zaddek is really bad! He has been known eat his own crew members. That has got to hamper his overall effectiveness as a captain. Lost Valyr also has one of the quirkiest romantic couples I had the pleasure to read about in 2018. Valyr rarely talks. Rachel makes up for it by filling in all the silent spaces. And did I mention they come from different planets?

Not Fade Away (Interstellar Rescue, #4) by Donna S. Frelick

Not Fade Away’s heroine Charlie has a dog that I love. His name is Happy. This loving pup wriggles his way into everybody’s heart. Well, maybe not everybody, but at least the important people. Including me, the reader. Hero Rafe may not be too sure about a dog at first. He is not from Earth and has never seen a dog before, but Happy knows a good person when he sees one and eventually they warm to each other. With part of the action taking place on Earth and part off planet, Not Fade Way has constant action that overlays the understated, but crucial romance between Charlie and Rafe. A fantastic addition the the Interstellar Rescue series.