About Abaddon Rising by P.L. Parker

One of a million statistics in the intergalactic war, Jocelyn St. Germaine is captured, sold as a slave and then forced to fight in the Deg’Nara gladiator games.  She’s slated to lose when Kanaan, the most feared warrior of all, claims her as his own. With his help, Joss’s chances of survival increase, but is it enough?

The Deg’Nara series takes place in a part of the galaxy where there is a really nasty alien race, the Deg’Nara, that wants to enslave or obliterate all other races and worlds out there. Why? There is not a lot of reasoning given, except, like I said, they are really nasty.

The good guys are either slaves of the Deg’Nara or part of the onging fight against them. Or both. This common background is ripe for drama and action and romance.

Kanaan is the local boy. Part Chiagan-Se and part Mogishada he was raised in the slave system, but his mother taught him everything he needed to know in order to not just survive, but to come out on top. Indeed, at the beginning of the book Kanaan is the ‘demon warrior of the slave pits’, also known as The Destroyer.

In the slave quarters Kanaan claims Joss to protect her, but it will soon become something more.

The relationship between Joss and Kanaan is a bit off again, on again, depending on the last conversation they had. It is not an easy alliance but as the reader, I knew they were meant to be together. However, neither of them is an ace communicator, so it takes awhile for them to confess their love. Which is how it should be. 🙂

Joss and Kanaan will go through much before the end of the book. Arena battles, training, a tournament, escape attempt, family re-union and ultimately, the chance to join in the great, far-reaching battle against the Deg’Nara. The story is nearly epic and the romance keeps the pace. I truly enjoyed every page of Abaddon Rising.

I feel like I should clarify the Deg’Nara series, which started with The Chalice, originally published in 2012. Breeder Slave came next, in 2017, but it does not seem to be billed as part of the series (according to Amazon or Goodreads). Finally, Abaddon Rising came out this year and it is designated Deg’Nara #2. It is a little confusing, but to clarify:

Breeder Slave really is part of the Deg’Nara series. It takes place during the same time period as Abaddon Rising but has mostly different characters and locations. There is a slight overlap. Read them in any order. Both fit in nicely with the Deg’Nara series.

The author provided a copy of this book in exchange for my honest review.

Don’t forget the ongoing giveaway for the audiobook of Phantom Evil by Heather Graham, or the print books of Catherine Cerveny’s The Rule of Luck and The Chaos of Luck.  If you haven’t entered yet, you might be interested to know that commenting on today’s post helps qualify you for an entry – see the giveaway post for all the details.  Or go straight to the giveaway….

He was her salvation…or her destruction.

The galactic war between the Chiagan-Se and the treacherous Deg’Nara wages on. The human females Leah and the Irish lass Moira are captured and then abandoned, forced to fend for themselves on a barren planet light years from all they know. Their only hope is Sulas, a fugitive breeder slave, who wants nothing to do with them. Survival is chancy at best, but together, the three embark on a perilous journey to rejoin the Chiagan-Se rebels. But can they survive?

Breeder Slave is a book of non-stop action with galactic warfare and romance with a variety of characters from Earth and from beyond.

In Breeder Slave, the setting is well established.  A group of human woman, abducted from Earth to become chalices (mates), have worked their way into Chiagan-Se society in a variety of capacities.  Meanwhile the war with the Deg’Nara goes on.  At the beginning of Breeder Slave, two humans have just escaped the Deg’Nara,

The setting is great – a desolate planet that will require every survival skill that Leah and Moira possess.  And lets face it, they will also need the skills of Sulas, the escaped breeder slave they meet up with.  In truth, Leah is a bit of a whiner and Moira is a cry-baby and neither is cut out for survival life.  Sulas is untrusting, but is unable to leave them to their fate so a tenuous relationship is formed.  On the surface, the three very different people should not really work well together – and sometimes they don’t.  But Leah and Sulas will find a way to get along – they have to – there is this attraction thing going on.  I see them as a great couple.  Both are difficult to get along with, so when they work things out, the heat is on!

They face the Deg’Nara. A nastier group of bad guys you will be hard pressed to find. These are not bad guys with some superior intellect or devious plan. They are malicious, mean, violent, and without a moral bone in their bodies. Perhaps this is a bit overdone, but on the other hand, it makes it really fun to boo the evil Deg’Nara. Basically they are trying to take over the universe and everyone that is not them should be dead or be their slave.

About half-way through the story, new characters are added, including a human that has risen through the Chiagan-Se ranks to become captain of her own ship.  Captain Amber Racehorse is hard-headed, tough and takes absolutely no crap.  I loved her!  She and pilot Eschel add interest and depth to the story and eventually take the struggle from the planet to a climatic battle in space.

I’m not crazy about the title of Breeder Slave.  You have to read the book to understand where it comes from.  The reason I don’t care for it is that it has connotations that are such a very small part of the story.  The title does not really reflect the action and most of the characters in the book.  Ignoring the title, I really enjoyed this story.

The author provided a copy of her book in exchange for an honest review.  She also sent The Chalice, recommending I read that one to know the background for Breeder Slave.  I am glad she did, though I think you could also enjoy Breeder Slave without reading The Chalice first.

Purchase Breeder Slave or The Chalice: 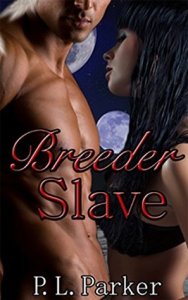