About Cartier’s Hope by M.J. Rose

New York, 1910: A city of extravagant balls in Fifth Avenue mansions and poor immigrants crammed into crumbling Lower East Side tenements. A city where the suffrage movement is growing stronger every day, but most women reporters are still delegated to the fashion and lifestyle pages. But Vera Garland is set on making her mark in a man’s world of serious journalism.

Shortly after the world-famous Hope Diamond is acquired for a record sum, Vera begins investigating rumors about schemes by its new owner, jeweler Pierre Cartier, to manipulate its value. Vera is determined to find the truth behind the notorious diamond and its legendary curses—even better when the expose puts her in the same orbit as a magazine publisher whose blackmailing schemes led to the death of her beloved father.

Set against the backdrop of New York’s glitter and grit, of ruthless men and the atrocities they commit in the pursuit of power, this enthralling historical novel explores our very human needs for love, retribution—and to pursue one’s destiny, regardless of the cost.

I picked up Cartier’s Hope because I loved the author’s Tiffany Blues.  Both feature artists.  This time the medium is gems.

While Tiffany Blues described a lot of the art and influences of Louise Comfort Tiffany, Cartier’s Hope fell short of my hopes in that area.  Art was replaced with gem lore and history.  The history of the Hope Diamond figures largely in the story, so if you are a gem lover, you will find that information fascinating.

Like many of Rose’s novels, this book is about rich people acting rich.  The main character, Vera Garland, works trying to right social wrongs and advance the status of women – as a reporter writing under a pseudonym.  However, when the job is over, she goes back to her rich life style.  Though she does not share the prejudices of her wealthy family and friends, she does share their expensive taste in pretty much everything.  I believe the author was attempting to point out the extreme differences between the rich and the poor, but the poor were poorly represented.

As reporter Vee Swann, Vera plots to expose a blackmailer.  Doing so will involve Pierre Cartier, so she much also act as Vera Garland.  Her plan seemed iffy at best, based on a low odds that it would pan out like she wanted.  I kept thinking ‘Really?”

There is a little bit of a romance, but I didn’t embrace it.  There were too many secrets between Vera and Jacob.  While all secrets came out in the end, I did not feel the connection between the two.

Usually, I love this author’s books.  While Cartier’s Hope is a well written novel, it fell short for me.  But if you like M.J. Rose and/or gems, you might like this one.

Read Cartier’s Hope for the history of suffrage, women in newspapers, Pierre Cartier, the Hope Diamond. 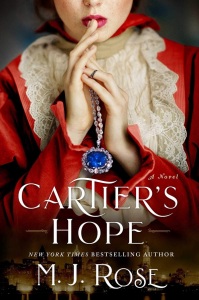 New York, 1924. Twenty‑four‑year‑old Jenny Bell is one of a dozen burgeoning artists invited to Louis Comfort Tiffany’s prestigious artists’ colony. Gifted and determined, Jenny vows to avoid distractions and romantic entanglements and take full advantage of the many wonders to be found at Laurelton Hall.

But Jenny’s past has followed her to Long Island. Images of her beloved mother, her hard-hearted stepfather, waterfalls, and murder, and the dank hallways of Canada’s notorious Andrew Mercer Reformatory for Women overwhelm Jenny’s thoughts, even as she is inextricably drawn to Oliver, Tiffany’s charismatic grandson.

As the summer shimmers on, and the competition between the artists grows fierce as they vie for a spot at Tiffany’s New York gallery, a series of suspicious and disturbing occurrences suggest someone knows enough about Jenny’s childhood trauma to expose her.

Supported by her closest friend Minx Deering, a seemingly carefree socialite yet dedicated sculptor, and Oliver, Jenny pushes her demons aside. Between stolen kisses and stolen jewels, the champagne flows and the jazz plays on until one moonless night when Jenny’s past and present are thrown together in a desperate moment, that will threaten her promising future, her love, her friendships, and her very life.

Jenny Bell is my character of the month. Of all the books I’ve read in the last 30 days, Jenny is the one I loved the most. Maybe it is her tragic past. Which made me cry. Or her artists optimism. Or determination to move forward. Its all those things really.

But if she does not have good supporting characters, the story would go nowhere. Minx Deering is the rich girl that does whatever she wants and gets away with it. You really want to set her down for a good talking to sometimes. Ben is the reporter that Jenny wants to trust, but can’t because he is a reporter and reporters ruin lives.

Then there is Oliver Comfort Tiffany, grandson of the great Louis Comfort Tiffany. He is the sort of rebel without a cause who befriends Jenny and encourages her when she needs it. Jenny and Oliver will become the two halves of one heart. But they are from opposite sides of the social spectrum and really, can that ever work out?

Perhaps my favorite supporting character is the man Louis Comfort Tiffany himself. He tells his own stories to enlighten his art. He guides Jenny with both suggestions and orders. His interactions with Jenny are beautiful and even spiritual. It is his line “…there is beauty even in broken things.” that brought tears to my eyes.

In addition to these exceptional characters, there is jazz, art and philosophy. And there is a mystery. While I did not find the mystery all that mysterious, it was critical in leading up the the climax, so pay attention!

In Tiffany Blues, the author’s notes are at the beginning of the story, which I liked. One of the reasons for the placement, I believe, is to tell the story of Laurelton Hall, the place Jenny and her fellow artists go to study with Mr. Tiffany. There is a mystery there too. In 1957, the magnificent hall was burned down and no explanation was ever made. The thing is, despite the precisely worded Author’s Note, while I was entranced by Jenny Bell’s Jazz Age story, I forgot all about Laurelton Hall’s unfortunate demise until the very end. Tiffany Blues is Ms. Rose’s brilliant explanation for the fire.

Tiffany Blues is a heartachingly beautiful story set in the Jazz Age amidst the exquisite art of Louis Comfort Tiffany. Art lovers will be drawn to this story, but anyone can savor it, as I did.

Through NetGalley, the publisher provided a copy of this book so that I could bring you this honest review. 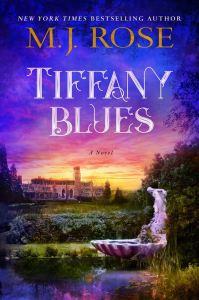