This collection of stories is about the unlikely heroes.  We all know them.  We see them every day.  They don’t even know they are heroes.  Until they need to be.  Heroes.

I wanted to read this for Patricia Briggs’ story about the werewolf Asil, a recurring character in her Alpha and Omega series.  In Dating Terrors, Asil goes on a date (arranged through a dating app) only to find out that he was picked as a date because of his superior strength and lethal talents.  But there is also Ruby, who almost immediately regrets using Asil and wants to back out. As you can imagine, events are propelled toward a showdown that doesn’t work out how Ruby imagined it would.  The question is, will Asil ever find true love?  This is a great story for Ruby, but even more so for Asil.  Over the series, he has grown as a character and will not disappoint Briggs’ fans in this short story.

Believe it or not, before I read Little Things, I had not read anything by Jim Butcher before.  This story is from the viewpoint of a sprite who must save the day while the giants (humans) around him don’t even know anything bad is happening.  I loved this story of the tiny little one using all available resources (even a cat) to overcome danger.

Kerrie Hughes is another new to me author and I was delighted with Troll Life, the story of a train station attendant, Harzl, who is a disappointment to his family because he has not become a station manager yet.  But he is intuitive and strong, so with his pet barghest (large, black, toothy dog) at his side he faces down evil to protect two innocents running for their lives.  Another great thing about this story – sentient trains.

Irish Wolfhound Oberon is the hero of Kevin Hearne’s Fire Hazard.  Perhaps other Iron Druid series readers will also feel that Oberon has always been great hero, but in this story, he proves that to himself.

I found several new to me authors and enjoyed long-time favorites.  Every single story in this collection is great!  They all stand alone, even if they are part of a series and there are no cliffhangers, so you will get your money’s worth on this anthology.  The collection includes:

The Dark Ship by Anne Bishop

The Return of the Mage by Charlaine Harris

The Vampires Karamozov by Nancy Holder

The Necessity of Pragmatic Magic by Jennifer Brozek

In this short story collection of courage, adventure, and magic, heroes—ordinary people who do the right thing—bravely step forward.

About A Blight of Blackwings by Kevin Hearne

SOLDIER AND AVENGER
Daryck is from a city that was devastated by the war with the Bone Giants, and now he and a band of warriors seek revenge against the giants for the loved ones they’ve lost. But will vengeance be enough to salve their grief?

DREAMER AND LEADER
Hanima is part of a new generation with extraordinary magical talents: She can speak to fantastical animals. But when this gift becomes a threat to the powers-that-be, Hanima becomes the leader of a movement to use this magic to bring power to the people.

SISTER AND SEEKER
Koesha is the captain of an all-female crew on a perilous voyage to explore unknown waters. Though her crew is seeking a path around the globe, Koesha is also looking for her sister, lost at sea two years ago. But what lies beyond the edges of the map is far more dangerous than storms and sea monsters. . . .

In this sequel to A Plague of Giants, these characters and more will become the voices of a new generation bringing hope and revolution to a war-torn world.

Review of A Blight of Blackwings

Again, Kevin Hearne as put me through an emotional journey.  After reading A Plague of Giants, I thought I would be prepared.  I was not.  Mr. Hearne’s masterful storytelling is ingenious, wildly inventive and so skillfully presented that this reader was blown away before being given a chance to brace against the wind.

Having read book 1 over 2 years ago, I had a bit of a struggle getting back into the story.  But somehow, suddenly I was there.  There are so many fascinating, colorful characters, each with unique personalities and motivations.

If you have not started this series, a little (non-spoilery) background is in order.  The story centers around the tales of master storyteller Fintan, who has traveled the world to collect his stories. He remembers everything, good or bad, and weaves his stories together by taking on the persona of the person he originally heard the tale from.  His voice projects over the entire town so that everyone in the harbor village of Pelemyn, which had recently survived an attack by the bone giants, can hear his songs and tales.

Fintan’s stories include tales of the bone giants, events and politics in all the surrounding areas and stories of the discovery of the 6th kenning.

Kenning’s are special paranormal talents that people may acquire by passing a test.  Those that do not pass the test do not survive.  Those that survived are blessed with special abilities such as Fintan’s ability to recall everything and project his storytelling voice.

As Fintan tells his story, some of his audience starts to become aware that their world is changing, even more than the changes caused by the bone giant attack.  This is part of the reason I will return to this series, even if there are two years in-between books.  I need to know how the world will adapt to all this fantastic knowledge!  But, specifically, I have a vested interest in the characters.  And I need the good ones to survive, thrive and have a HEA.  That is my hope.

Add A Blight of Blackwings to your Goodreads shelf:

Purchase A Blight of Blackwings: 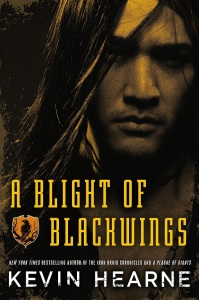 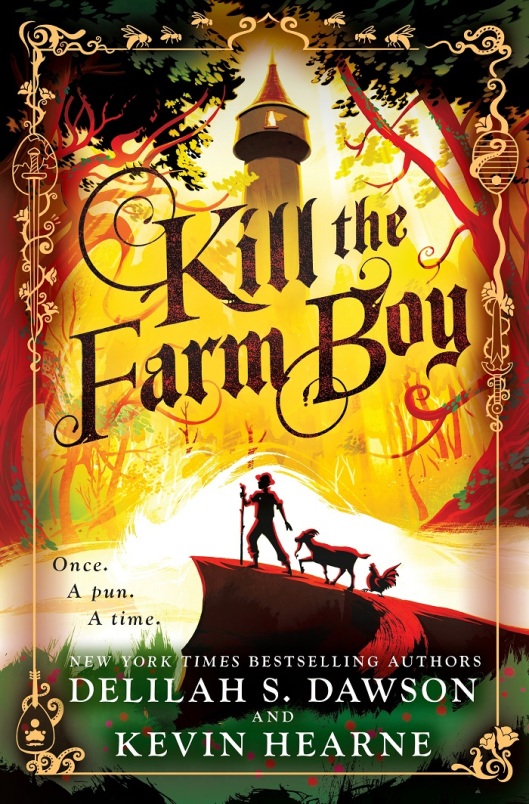 About Kill the Farm Boy

Once upon a time, in a faraway kingdom, a hero, the Chosen One, was born . . . and so begins every fairy tale ever told.

This is not that fairy tale.

There is a Chosen One, but he is unlike any One who has ever been Chosened.

And there is a faraway kingdom, but you have never been to a magical world quite like the land of Pell.

There, a plucky farm boy will find more than he’s bargained for on his quest to awaken the sleeping princess in her cursed tower. First there’s the Dark Lord, who wishes for the boy’s untimely death . . . and also very fine cheese. Then there’s a bard without a song in her heart but with a very adorable and fuzzy tail, an assassin who fears not the night but is terrified of chickens, and a mighty fighter more frightened of her sword than of her chain-mail bikini. This journey will lead to sinister umlauts, a trash-talking goat, the Dread Necromancer Steve, and a strange and wondrous journey to the most peculiar “happily ever after” that ever once-upon-a-timed.

Review of Kill the Farm Boy

To say that Kill the Farm Boy is Punful may be the best way to describe the book, in a way that Argabella, my personal favorite character, would appreciate.

There are many wonderful characters, but Argabella, the rabbit girl who wanted to be an accountant but her father made her study to be a bard, is the most adorable heroine. Her barding may need some practice, but she does have a way of cutting to truth seeking in a direct though slightly timid way. And despite the fact that she was not first in her bard school class, her ability to sing magical poems will come in handy during the quest. It was an enchantment that made her a rabbit girl. Throughout the story she wishes she was not a rabbit girl, but, it is in this furry form that the best and scariest things happen to her. Like meeting the Chosen One, the Dark Lord, a rogue assassin and her love, the mighty fighter.

The rogue is clumsy, the mighty fighter doesn’t like to fight, the Dark Lord’s finest ensorcellments come in the form of bread and the Chosen One is, well, not exactly what any fairy tale would pick as a Chosen One.

Despite the fact that these fine fairy tale characters are definitely thinking out of the fairy tale box makes Kill the Farm Boy all that much more interesting and totally unpredictable. The one archetypical fairy tale element that cannot be denied or messed with, though, is the quest. Indeed there will be a quest. A quest that will save king and country, the Chosen One and all his lively band of heroic fellow-questers. That may have been a lie. About everybody being saved. Sorry if you think this is a spoiler, but get real. There are swords and assassins in this tale.

In fact, there are so many more fairy-talisms that get turned on their ears, you will come to realize that this is story is not going to have a fairy tale ending. Any chance at a Happily Ever After is sure to take a wrong turn. The questers are going to make sure that what you think will happen, never will.

When I first saw the title, Kill the Farm Boy, I immediately thought of The Princess Bride. In fact there are quite a few things that make you think of the classic movie and one or more other movies. If you have a well-loved fantasy movie expect to see it crop in a mutated manner.

Would it be terrible thing to say that this book is too hilarious? There are multiple puns and jokes and guffaws on every single page. I am not exaggerating. That fact is, I think there was also an adventure in there somewhere, but I’m not sure for all the terrible puns. For multiple laughs on every page, Kill the Farm Boy is the perfect read.

Through NetGalley, the publisher provided a copy of this book so that I could bring you my honest review. 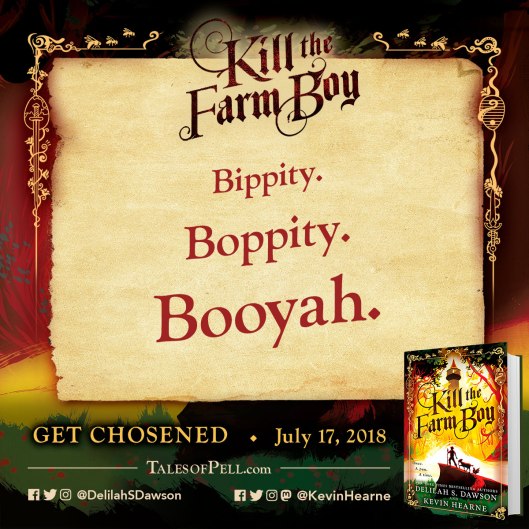 Add Kill the Farm Boy to your Goodreads shelf: