About A Song of Flight by Juliet Marillier

Two warriors. One wields the power of music, one the strength of her sword. Both face a grave threat in this enthralling historical fantasy.

After a violent encounter with masked men and the sinister Crow Folk, Prince Aolu of Dalriada disappears without a trace, and his companion Galen is seriously injured.

Liobhan and the Swan Island warriors seek answers to the prince’s abduction. For Liobhan this mission is personal, as Galen is her beloved brother.

While she and her team investigate, Liobhan’s younger brother Brocc is in serious trouble. Brocc’s secret attempt to communicate with the Crow Folk triggers a shocking incident, and sends him on a path which endangers the one he loves above all else.

What brought the Crow Folk to Erin? And who plots to use them in an unscrupulous bid for power? As Liobhan and Brocc seek the truth, it becomes clear the two missions are connected – and an extraordinary mystery unfolds.

Review of A Song of Flight

I am such a sucker.  I prefer to project a life of easy happiness on my favorite characters.  But this author pulls that rug out from under me every time. This time Brocc and his baby daughter are kicked out of their home all because he was trying to bridge a very wide communication gap with the Crow Folk.

At the same time, the Prince of Aolu disappears while in the company of Galen (Brocc’s brother.)  It is up to the Swan Island Warriors, to find the prince.  Galen and Brocc’s sister Liobhan is one such warrior as is her lover Dau.  So, as you can see, this story will be a story of family.

And much more.  As these adventures go, paths will cross.  Old enemies will emerge, new enemies will arise.  The Crow Folk, will begin to be understood.  An old tale reveals a curse that may explain much.  A Song of Flight has so many things going on.  Master storyteller Juliet Marillier does a very fine job of weaving all the threads together.

Intrigue had me imagining all varieties of outcomes – terrible and wonderful!  And all through the story, the characters emotions tugged at my own heart.  I always want Liobhan and Dau to be together and Brocc needs his happy ending.  But as a reader of fantasy, I know they will have to overcome many challenges before they get to that point.  I love, love, love this enchanting story and the series!

Thanks to the publisher who provided a copy through NetGalley in exchange for my honest review.

Add A Song of Flight to your Goodreads shelf:

Purchase A Song of Flight: 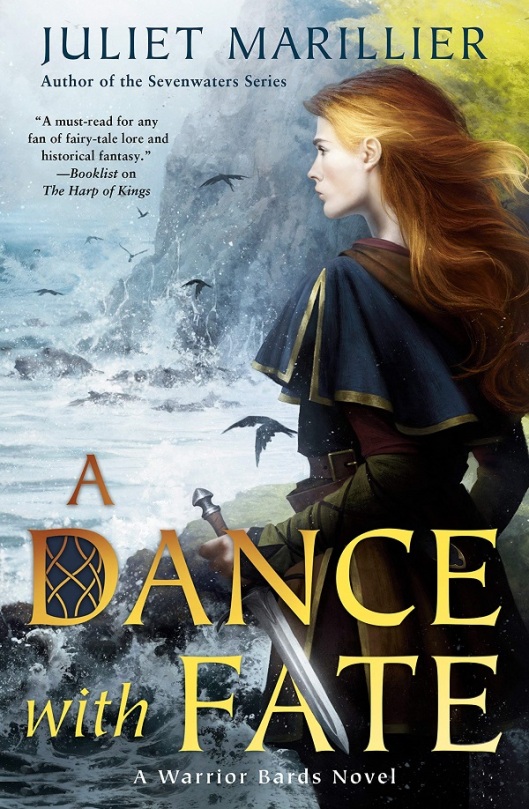 About A Dance with Fate by Juliet Marillier

The young warrior and bard Liobhan has lost her brother to the Otherworld. Even more determined to gain a place as an elite fighter, she returns to Swan Island to continue her training. But Liobhan is devastated when her comrade Dau is injured and loses his sight in their final display bout. Blamed by Dau’s family for the accident, she agrees to go to Dau’s home as a bond servant for the span of one year.

There, she soon learns that Oakhill is a place of dark secrets. The vicious Crow Folk still threaten both worlds. And Dau, battling the demon of despair, is not an easy man to help.

When Liobhan and Dau start to expose the rot at the center of Oakhill, they place themselves in deadly danger. For their enemy wields great power and will stop at nothing to get his way. It will take all the skills of a Swan Island warrior and a touch of the uncanny to give them a hope of survival. . .

Review of A Dance with Fate

Master storyteller Juliet Marillier has once again succeeded in getting into my heart with the continuing story of Liobhan, Dau and Broc.  These characters became family for the brief time I was reading their story.  When they hurt, I hurt.  When they laughed, I smiled.  When they loved, I smiled even more!

Chapters alternate viewpoints between Liobhan, Dau, and Brocc.   Brocc has married the queen of the Otherworld and uses his warrior training and singing voice to protect the peaceful creatures from the crow people.  When he discovers a disturbing death of one of the crow people, things start to change between Brocc and his wife, Eirne.  At one point, Brocc suffers a personal loss that will surely have long lasting effects.  Not all these effects are witnessed in this book, so I am certain there will be more to come in the next book.

In the meantime, Dau and Liobhan are struggling with their new roles as invalid chieftain son and bond servant in a place where both suffer at the hands of Dau’s older brother.  There is more going on here than is obvious.  Dau and Liobhan will be in the center of the mess to come.  There will be much to learn and much to make better.  And there will be a redemption.

In The Harp of Kings, the beginnings of a romance between Liobhan and Dau hinted at more to come.  In A Dance With Fate, that ‘more to come’ means that the two come to care for each other, while realizing that the warrior’s life means they cannot be together.

A Dance With Fate is often heartbreaking.  At times I wondered if even wanted to continue because I knew it was going to get worse before it got better.  But as an experienced Juliet Marillier reader, I knew that eventually, the heartbreak would be eased and be replaced with beauty and magic, hope and happiness.

Add A Dance with Fate to your Goodreads shelf:

Purchase A Dance with Fate: 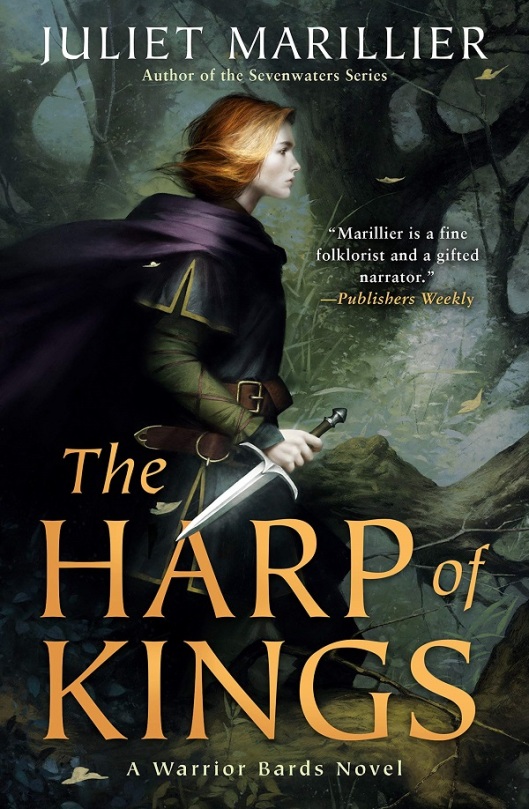 About The Harp of Kings by Juliet Marillier

Eighteen-year-old Liobhan is a powerful singer and an expert whistle player. Her brother has a voice to melt the hardest heart, and a rare talent on the harp. But Liobhan’s burning ambition is to join the elite warrior band on Swan Island. She and her brother train there to compete for places, and find themselves joining a mission while still candidates. Their unusual blend of skills makes them ideal for this particular job, which requires going undercover as traveling minstrels. For Swan Island trains both warriors and spies.

Their mission: to find and retrieve a precious harp, an ancient symbol of kingship, which has gone mysteriously missing. If the instrument is not played at the upcoming coronation, the candidate will not be accepted and the people could revolt. Faced with plotting courtiers and tight-lipped druids, an insightful storyteller, and a boorish Crown Prince, Liobhan soon realizes an Otherworld power may be meddling in the affairs of the kingdom. When ambition clashes with conscience, Liobhan must make a bold decision and is faced with a heartbreaking choice…

Review of The Harp of Kings

I absolutely loved The Harp of Kings. If you have read any of Juliet Marillier’s books, you know that she is natural storyteller.

Tears are shed and heartstrings are pulled as you read the story told from the alternating veiwpoints of of Liobhan, Brocc and Dau while they take on their first and hopefully not last mission for Swan Island. In each character’s narration, they reveal the hopes and fears that magically transfer from the character to the reader. All three are young, but family and experience have given them wisdom beyond their years.

Although the story takes place in a different part of Erin than Marillier’s Blackthorn and Grim series, the atmosphere is the same. References to people and places of that series will delight fans. A wisewoman, a ruler that needs help, a bit of mysticism and people becoming friends are also familiar themes.

As the book blurb describes, the Crown Prince is a boor. Nobody believes he will make a good ruler, but there is no alternative. And our three heroes are tasked with finding the harp so the coronation can occur. Up until the very end, I was not sure how that part of the story would play out, but I was happy with the rightful ending.

Details of various character’s lives, especially Dau, Brocc and the child Aislinn are revealed throughout the book. Surprisingly, Liobhan’s background is the sparsest, even though she is the strongest character. The lovely cover by Mélanie Delon does a nice job of depicting Liobhan.  This lack of detail may be deliberate, but in the meantime, I was drawn to Dau, who’s tragic background had me cheering for him all the way! As an animal lover, he gets extra points too!

After finishing the story, I did a little research and read that the harp is significant in Irish history and mythology. So it is no wonder that it now inspires such a magical story. While the instrument itself may be just a plain harp, the effects of the music that springs are mystical. Take that as you like, but when Brocc plays his plain bard’s harp, listeners can’t help but dance or laugh or weep. Does the Harp of Kings have such magic? The myth surrounding it would have you believe so. And reading the book proves that magic does exist!

I am so in love with this story that I needed more than 5 stars to rate it. Full of dreams, youth, wisdom, and music, The Harp of Kings is heartbreaking, beautiful, hopeful and magical.

Add The Harp of Kings to your Goodreads shelf: 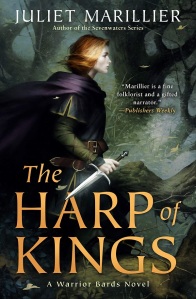