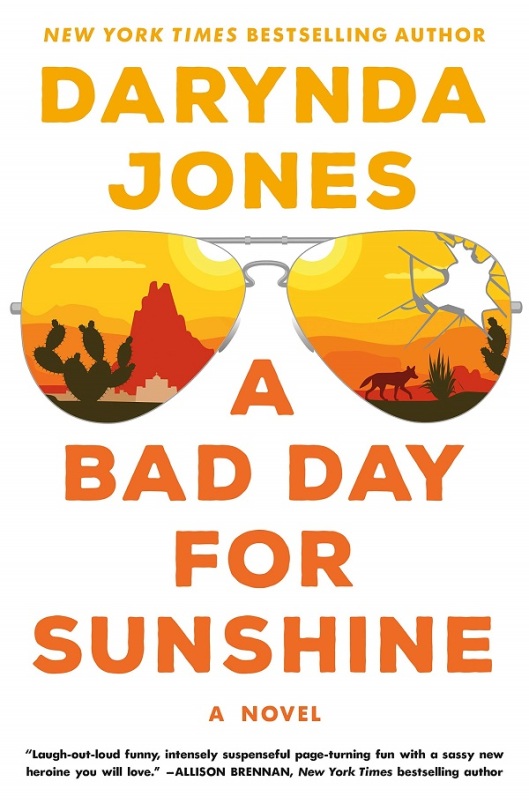 About A Bad Day for Sunshine by Darynda Jones

Sheriff Sunshine Vicram finds her cup o’ joe more than half full when the small village of Del Sol, New Mexico, becomes the center of national attention for a kidnapper on the loose.

Del Sol, New Mexico is known for three things: its fry-an-egg-on-the-cement summers, strong cups of coffee—and, now, a nationwide manhunt? Del Sol native Sunshine Vicram has returned to town as the elected sheriff—thanks to her adorably meddlesome parents who nominated her—and she expects her biggest crime wave to involve an elderly flasher named Doug. But a teenage girl is missing, a kidnapper is on the loose, and all of this is reminding Sunshine why she left Del Sol in the first place. Add to that the trouble at her daughter’s new school, plus and a kidnapped prized rooster named Puff Daddy, and, well, the forecast looks anything but sunny.

But even clouds have their silver linings. This one’s got Levi, Sunshine’s sexy, almost-old-flame, and a fiery-hot US Marshal. With temperatures rising everywhere she turns, Del Sol’s normally cool-minded sheriff is finding herself knee-deep in drama and danger. Can Sunshine face the call of duty—and find the kidnapper who’s terrorizing her beloved hometown—without falling head over high heels in love…or worse?

Review of A Bad Day for Sunshine

What a great start to a new series by Darynda Jones.  Sunshine Vicram is the smart-talking new sheriff of Del Sol, New Mexico.  Elected without even knowing she was on the ballot, Sunshine shows up to her first day of work and as soon as the muffins arrive, the roller-coaster takes off.  No, I am not going to explain that remark.

Sunshine moved into her parents guesthouse with her daughter Auri, with whom she shares a close relationship.  Auri is smarter than the average teenager, which is just fine with the adult me who appreciates her maturity.  And her wit.  For example, when mom asks, “I do look rather badass, don’t I?”, Auri responds with “All that matters is that you think you look badass.”

Sunshine’s best friend is Chief Deputy Quincy Cooper. He is Sunshine’s straight man at the office.  Or is it the other way around?  At any rate, the BFF’s make a great team.

Sunshine has a past, the details of which are grudgingly revealed throughout the story.  The main story line(s) follow Sunshine’s first cases in her new job.  A missing girl, a chicken/rooster feud, an escaped prisoner and a deputy that is always conveniently unavailable.

Readers of Ms. Jones’ Charley Davidson series will see many similarities between the two series in both characters and construction.  The similarities include (but are not necessarily limited to):

So if you lamented the end of Charley Davidson, take heart. Sunshine Vicram is just a charming, just a funny, just as complex, just as smart, has just as much heart, and I think I might like her even more than I liked Charley.

Add A Bad Day for Sunshine to your Goodreads shelf:

4 thoughts on “A Bad Day for Sunshine (Sunshine Vicram, #1) by Darynda Jones – Review”