Welcome!  You have arrived at day 1 of Furry Friends Week. In honor of the release of Pets in Space 4 (come back tomorrow for a release announcement and guest post), there will be five days of posts relating to our Furry Friends.  And maybe a few not-so-furry friends.  Today, a review of a book with not one but two Furry Friends. 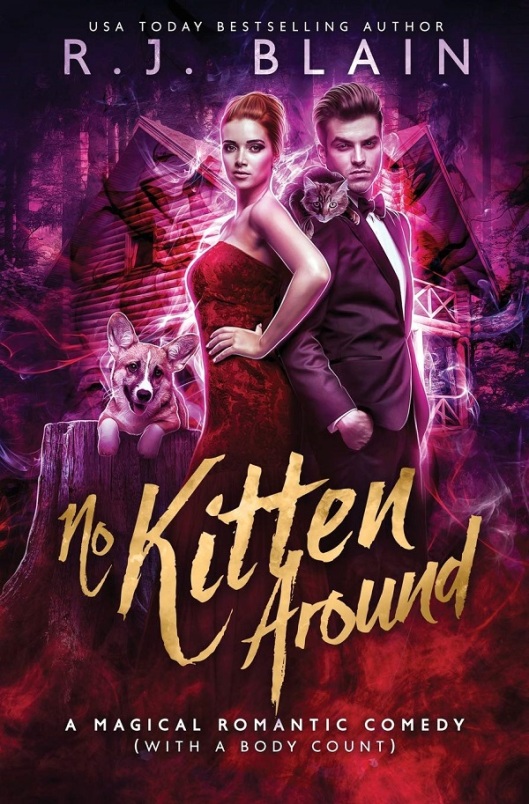 About No Kitten Around by R.J. Blain

The last thing Reed Matthews needs in his life is a kitten, but when an orphaned tabby suckers him into becoming her caretaker, he’s in for the ride of his life. Add in an angel determined to meddle in his affairs, a devil with an agenda, and a bucketful of bad omens, and he’ll count himself fortunate if he survives the clash between heaven, hell, and his ex.

In this anything goes romp, there’s no kitten around: if Reed wants to survive and regain control of his life, his only hope lies in the hands of an elf and his ex, a woman he’s sworn to never see again.

Review of No Kitten Around

No Kitten Around is an urban fantasy chased by romance and rounded up with a scary amount of humor. With a kitten. And a puppy. Do I really need to continue with this review?

Reed, the narrator, starts out by describing his weekend activity: going to a bar, finding a shallow woman to take him home and then leaving her without even knowing her name. So, Reed is not trying to make an impression on the reader. But then he finds a kitten. This is when the story gets interesting and hilarious. Reed can’t decide if he is afraid of the kitten or is captivated by it. Maybe a bit of both.

When the kitten was immediately and auspiciously named Kitten, Destroyer of Worlds, I was confident this book could not get any better. But I was only on Chapter 1, so I thought I’d see if there was more. (There is!)

Reed has a past that is both disturbing and heartbreaking, but he is going forward. When his ex-girlfriend Kennedy shows up about the same time as Luna the angel, he knows his life is going to get unnecessarily complicated. Or maybe it is necessary. As the story grows, you learn that Reed’s genetic heritage is also complicated. I enjoyed Reed’s uncertainty about his heritage along with his efforts to keep it from controlling him. All while Reed is cracking jokes. Kennedy adds a Corgi puppy to the mix because, well, Kitten needs a furry friend. The puppy also gets an auspicious name.

Samantha the elf is a great character. She is the warrior that trains Reed and Kennedy on the use of swords. She is a ruthless taskmaster, but both Reed and Kennedy seem to know that hard work and discipline are needed if they are to succeed. The moral is nice teachers’ students finish last. Samantha is also somewhat of a matchmaker. If you can, imagine a ferocious controlling elf playing matchmaker.

There is a reason that Reed and Kennedy need to learn how to handle a sword. The whole story builds up to a climactic scene where Reed and Kennedy used their hard-won skills and save the world. Or at least a corner of the world. With angels and devils involved, it is hard to tell how widespread the potential disaster could spread. With kittens and puppies involved, one can only assume cuteness will counteract the disaster.

A couple of things I wasn’t really sure about. Who is Luna and really, what is her goal? It wasn’t entirely clear and Luna is kind of a major player, if not a major character. Also, why are angels headless?

No Kitten Around is all round hilarious and full of lessons and love. I really enjoyed this book and plan to check out more in Blain’s Magical Romantic Comedy series.

Add No Kitten Around to your Goodreads shelf:

Purchase No Kitten Around: 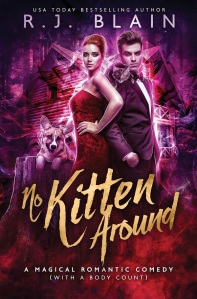 Furry Friends Week continues tomorrow with special guest Laurie A. Green who will talk about the anthology Pets in Space 4, which releases tomorrow, and the charity the authors support.  Wednesday, look for my review of Pets in Space 4.  Thursday, another book review, this time scifi romance, that features a Furry Friend.  And Friday will be a special feature of art and Furry Friends.  I hope you will return to Whiskey With My Book each day this week!

5 thoughts on “No Kitten Around by R.J. Blain – Review”