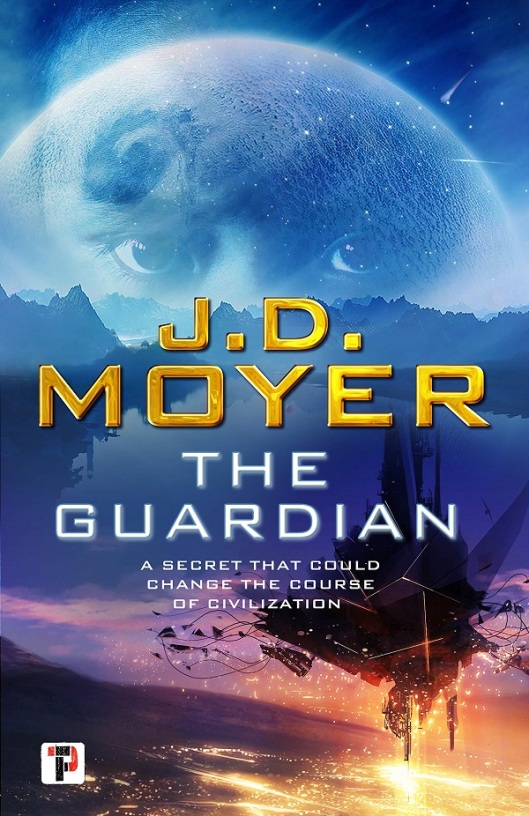 About The Guardian by J. D. Moyer

In the year 2737, Earth is mostly depopulated in the wake of a massive supervolcano, but civilization and culture are preserved in vast orbiting ringstations.

Tem, the nine-year-old son of a ringstation anthropologist and a Happdal bow-hunter, wants nothing more than to become a blacksmith like his uncle Trond. But after a rough patch as the only brown-skinned child in the village, his mother Car-En decides that the family should spend some time on the Stanford ringstation.

Tem gets caught up in the battle against Umana, the tentacle-enhanced ‘Squid Woman’, while protecting a secret that could change the course of humanity and civilization.

The Guardian, the sequel to the The Sky Woman (review here), is a story of colliding worlds and the contested repopulation of a wild Earth.

Review of The Guardian

The Guardian is the continuation of the story that began in The Sky Woman. It takes place on and above a post-apocalyptic Earth, centuries after catostrophic depopulating events took place. Now, the earth is becoming habitable and civilization is making a comeback. And everyone wants a piece of Earth.

Much of the population fled to space stations to wait out Earth’s recovery. But not all. The residents of Earth may not be as technologically advanced as the ring stations, but they are socially evolved enough to recognize a threat in the ringstation interest in their world. The stark contrast between the earth-dwellers and ringstation dwellers causes both conflict and cooperation.

The main character focus has shifted from Car-En, the ringstation anthropologist, to her nine-year-old son Tem. Raised on Earth in Happdal, Tem is the son of Esper, so is half native. I really enjoyed Tem’s youthful viewpoint, though it is written with a mature voice. I watched as Tem’s world expanded from his Uncle Trond’s blacksmith shop to encompass much of Earth and the ringstation Standford, including his grandfather and many new friends. He may always want to be a blacksmith, but his mind is opened up to so many more possibilities on the Stanford with his friends. With the exciting possibilities come possibilities that are also dangerous.

Adrian Vanderplotz is the villain from book one. Now, he has established a research station on Earth, but colludes with a military force from another ringstation to take over the settlement. He gets more than he bargained for. It is always nice when the evil villain learns he is not the genius he thinks he is!

Enter Squid woman, Umana. This grotesque approximation of a military Commander seems to be the real villain in the story. But pay attention. Here is where book 1’s story of the gast evolves. What began as a supernatural creature in The Sky Woman, is revealed to have a scientific beginning in Earth’s history. And it is not done yet. Evolutionists may like Umana, but most of us will be uncomfortable with the scientific ‘progress’ that created her.

Individual story lines did seem a bit disjointed. Plus there were adventures with giant dogs and odd population groups on earth that seemed to have little to do with the story (like the giants in book 1). However, most of it is connected and patience is rewarded.

The Guardian. The title of this book. I really haven’t figured that out. In fact the word guardian is used only once in the story in reference to Tem’s grandfather as his guardian. Hmmm. The characters Katya and Tem come to mind as possible guardians, but I’m not sure what the author was referring to. Read the book.  Let me know what you think.

Overall, The Guardian is a pretty good tale, complex, multi-faceted and full of danger and excitement.

Add The Guardian to your Goodreads shelf: