Yesterday, I reviewed the first three books in Anne Renwick’s Elemental Steampunk series (according to a suggested reading order).  Like I mentioned, it is actually 3 series, but I am treating them as one for my review purposes and because that is how I view them.

Today I have reviews of three more books in the series.  The Silver Skull, Kraken and Canals and A Trace of Copper.  After this, there are three more books which I have not read yet, but they are, most definitely, on my TBR list!

About The Silver Skull

An illegal border crossing. A fake marriage. A mad German count determined to create an army of unbreakable soldiers.

Lady Olivia is not all she seems. Trained for marriage to an assigned political target, her skills lie in programming household steambots to serve tea, dress her hair… and sound the alarm while she picks locks and listens at doors. Humiliated by a failed assignment, she decides to redeem herself by tailing a suspected double agent.

Lord Rathsburn must flirt with treason. Struggles to cure a horrible disease have met with unexpected complications. The cells he engineered can make a man’s bones unbreakable, but the side effects are fatal. He believed the research terminated… until his sister was kidnapped by a German count. Her ransom? A cure.

Piloting a stolen dirigible, he uncovers an unlikely stowaway, Lady Olivia. Arriving together at a crumbling castle, an impossible task is set before them: cure the count’s guardsmen. Amidst their fake marriage, a very real growing attraction, dying guardsmen and escalating hostilities, Lady Olivia and Lord Rathsburn are thrust deep into the world of international medical espionage from which there may be no return.

Review of The Silver Skull

Through spying and manipulation, Olivia ends up travelling (stowing away) to Germany with Rathsburn, even though she is not a real spy. She wants to be. But she is not. I had to like this very nervy young woman, even if I thought she was also getting into big, bad trouble. Which she was.

In The Silver Skull, Lord Rathsburn’s osforare apparatus is the steampunk contraption of the hour. Designed to inject a serum just below the surface of the bone, the device caused the heroine to faint. She doesn’t like needles or blood. Trouble is, she is masquerading as a doctor’s assistant. How is that going to work?! BTW, the apparatus needs additional programming, which is Olivia’s specialty. Now, it is very convenient that she stowed away.

Somehow, Olivia and Rathsburn find a way to work together, even if they don’t trust each other. This part of the love story is filled with tension and hope and eventually more. I loved both of these characters for their heart, their brains and their outright courage.

The Silver Skull has a gothic feel. In it, we end up in an old decrepit castle with an insane villain that will do whatever it takes to get what he wants. This includes purposely infecting soldiers (i.e. lab rats) with a terrible disease. Plus the villain has co-conspirators that are almost as bad as he is.  They are just plain Evil. Really Evil! The kind that has you racing through the pages to see them caught.

Oh, there is flying too. With mechanical wings. Well, maybe more like gliding. But with wings. How cool is that!

About Kraken and Canals

An old love. A giant kraken. A dive into the infested canals of Venice.

Time has run out. Rules must be broken and her patron’s wrath risked. To save the woman who raised her, Lady Judith must visit the underwater grotto of a giant lagoon kraken. Survival isn’t guaranteed, but Arturo will not let his love face the dangers of the canals alone.

Review of Kraken and Canals

Most great steampunk series at least mention krakens. Well this story has a kraken in a starring role. Well, maybe not starring.  But figuring hugely!

The krakens are a menace all over the world. The readers of this series have already learned of them in London. In Venice, the presence of krakens among the city’s sub-structures is especially troubling. Their hooked tentacles tend to destroy foundations. Arturo’s plans to save the city bring him into Judith’s world. Underwater kraken hunting provides the suspense, danger and heroic action in Krakens and Canals. This short story is a fun, thrilling addition the Elemental Steampunk world. 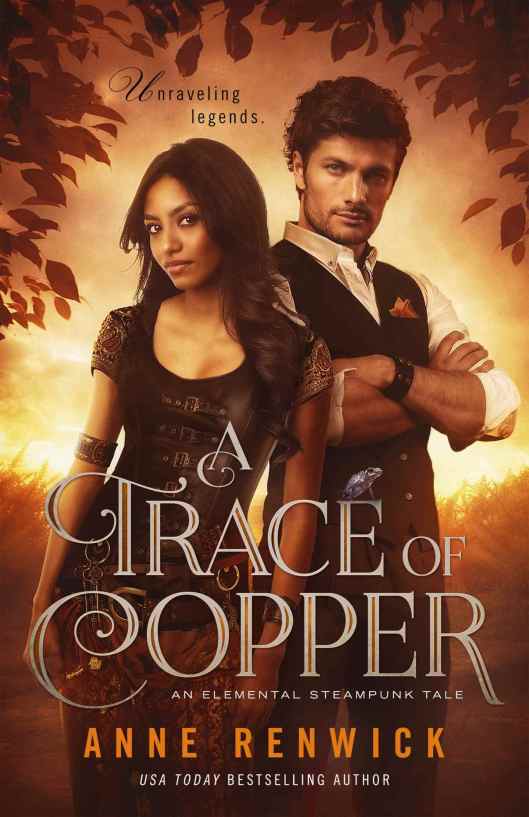 About A Trace of Copper

A small Welsh village. An interrupted romance. A rogue frog on the loose threatening their future.

New recruit to the Queen’s agents, Dr. Piyali Mukherji is given a simple first assignment. Travel to the small Welsh village of Aberwyn and solve the mystery of a young woman’s blue skin lesion. A challenging task, for the alarming infection is unlike anything she’s seen before–and it’s spreading.

Evan Tredegar, the town’s pharmacist and the only man to ever capture her heart, knows more than he’s telling. Despite his efforts to push her away, her touch reawakens old desires. As more villagers fall victim to the strange disease, he’ll have no choice but to reveal his secrets, even if it means sacrificing his freedom.

Together they must move past broken promises, capture a rogue frog, and stop the infection before it spreads out of control.

Review of Audiobook A Trace of Copper

Like many of the shorter stories in the Elemental Steampunk world, A Trace of Copper focuses on a heroine and a hero who previously fell in love and were then parted. Brought together by a mysterious medical case, it is evident they still care for each other.

Evan’s secret, the reason Evan and Piyali stayed apart, is pretty big. And I could sympathize with Evan’s reasons for keeping the secret. But Piyali (who is a Queen’s agent) is going to need all the facts in order to solve the mystery. Evan and Piyali make a great team even if they don’t completely trust each other. I kept wondering how they would resolve their differences even though I knew the author would come up with a solution.

The small Welsh town with single women chasing Evan, a local pub, folklore, gossips and mistrust of the unknown Indian female doctor make up the perfect setting for the reunion of these former lovers.

A Trace of Copper is short novel that I enjoyed as an audiobook. The narrator, Anais Inara Chase, has a pleasant voice, but I did not care for her timing (longer than necessary pauses). Still, I thought she was that is right for this story and can recommend this book whether you like to read or listen. 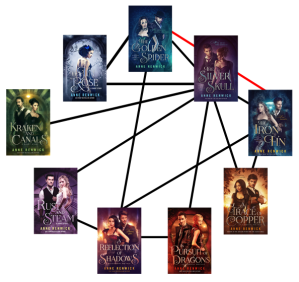