Today, I have a special treat. Please welcome Tiffany Roberts who has a new book this week, Treasure of the Abyss.  Today, a bit about the creative process of an author….

It’s not easy choosing topics for blog posts (which is why we never keep up on our own blog), so we decided to pull back the curtain and give you a glimpse of our creative process! Don’t worry, it’s probably just a coincidence that this special peek into our world is about our latest book, Treasure of the Abyss.

Firstly, if you’re confused about the ‘we’, Tiffany Roberts is actually two people — a husband and wife duo, Robert and Tiffany. One of the benefits to this arrangement is that we get to refer to ourselves in the third person while also using ‘we’ throughout this post! Bonus points if you don’t get confused.

We’d planned to finish our fantasy series — The Isle of the Forgotten — this past fall. Our outline of the final book, Make Me Surrender, was complete, we’d been through our preliminary arguments and creative differences, and had even jumped in to begin writing it. But it was a struggle. The hardest start we’ve had since we began our self-publishing journey two years ago.

Now, this next part may not seem related, but just stick with us…

Around the same time, Tiffany had been experimenting with monster erotica shorts under a penname that shall remain super-secret. She’d work on these stories while Rob was at his day job, and focused on the duo books in the evenings and on the weekends. As we continued to battle Make Me Surrender, Tiffany was a couple of chapters into her latest erotica…featuring an octopus man.

She decided — quite suddenly, Rob would say — that she wanted the story to become a full-length Tiffany Roberts novel.

Picking up her phone, she called Rob at work to propose the idea (which meant it was definitely happening).

“Let’s do lunch!” she said. “Good? Good! We can brainstorm over soup and salad!”

“What about Make Me Surrender?” Rob asked.

“Neither of us is feeling it right now, and the last thing we want to do is rush it.”

So, over lunch at Olive Garden, we collaborated on the setting for Treasure of the Abyss, including the backstory for the kraken, our race of octopus-men (and women). With our last book having come out in July, we wanted to get something out as quickly as we could, so we set a goal to release before February. Our fruitless struggles with Make Me Surrender had left us behind schedule, but National Novel Writing Month — NaNoWriMo to those in the know — was right around the corner. We figured it was a perfect time to push ourselves.

Of all the advice we’ve heard about writing, there’s one tidbit we value over everything — B.I.C., or BUTT IN CHAIR. Over the last two years, we have made B.I.C. our routine. When we’re working on a book, we’re working on it every day. For Tiffany, who is very self-motivated and goal-driven, this makes NaNoWriMo a great incentive. For Rob, who is…not self-motivated or goal-driven, it’s a bit more difficult.

Either way, we knew 50k words in a month was no problem. We’ve done it before. That’s all Treasure was supposed to be — a relatively quick, fun, 50k word read. But, as we reached that 50k mark in our manuscript, we realized there were a lot of bullet points left on the outline…

We pushed hard, putting in five or six hours a night on weekdays (after the aforementioned day job), and twice that each day on the weekends. Four weeks after starting, our finished first draft of Treasure was just under 100k words. Our second longest book to date.

“We’re so writing about Arkon next,” Tiffany said.

“Umm…what? What about Make Me Surrender?” Rob inquired.

“Eventually. For now, I needs mah tentacles!” Tiffany replied with a grin (a grin that still haunts Rob to this day). She gestured to the comments from our readers on Facebook. “And so do they! Much tentacle love!”

(Speaking of tentacles, we had a…disagreement when it came to a *ahem* certain part of our kraken’s anatomy. Ultimately, Tiffany won. She always wins…or at least that’s what Rob lets her think.)

So what was meant to be a relatively short book turned into a planned three-book series, just like that.

You may be wondering where we’re going with all of this. What’s the point? Why did I bother reading? Well, we told you it was just a glimpse into the life of an indie-author duo…but if you want a takeaway, let it be B.I.C.

If there’s something creative you’ve always wanted to do, the most important thing is that you do it. We live in exciting times; anyone can create and share their vision with the world. Whether you want to write, paint, make music, dance, carve wood, produce video content, or whatever, just do it. You’ll feel better for it, and wherever your creation goes, the accomplishment for having done it can’t be obtained anywhere else.

Also, you should totally check out Treasure of the Abyss and all of our other books. *Wink* 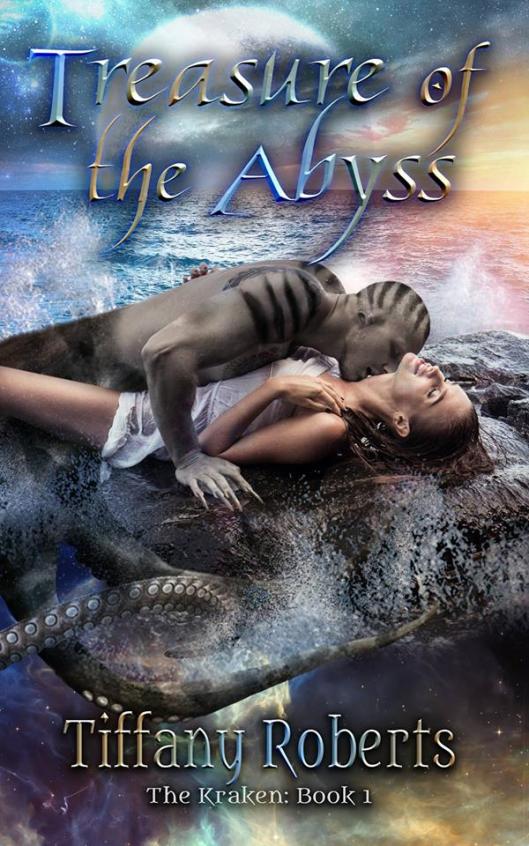 About Treasure of the Abyss

HIS TREASURE AND HIS OBSESSION…

Despite her longing for the sea, Macy has clung to the safety of land for half her life, devoting herself to her daily routine — until she agrees to go sailing with a childhood friend. Her fears come to fruition when a sudden storm capsizes their boat, rekindling her old terror. She awakens to a rescuer who is anything but human — and he refuses to let her go. Treated like a curiosity and a possession, she’s desperate to go home. Yet Macy is undeniably drawn to this strange creature. Can she give up her old life, her family and friends, to embrace this adventure…and Jax?

HER SAVIOR AND HER CAPTOR…

Jax the Wanderer is a hunter, an explorer, and an oddity among his kind. While other kraken are content near their dens, Jax is driven by a deep need to journey far and wide, discovering the unknown corners of the sea. Macy challenges everything he’s known; she is the most alluring creature he’s ever seen on his travels. He must possess her, though he knows it can only end in disaster. How much is he willing to forsake for the female he desires?

Add Treasure of the Abyss to your Goodreads shelf:

Purchase Treasure of the Abyss:

Tiffany Roberts is the pseudonym for Tiffany and Robert Freund, a husband and wife writing duo. Tiffany was born and bred in Idaho, and Robert was a native of New York City before moving across the country to be with her. The two have always shared a passion for reading and writing, and it is their dream to combine their mighty powers to create the sorts of books they want to read. They live in southwestern Idaho with their three children, where they are now actively pursuing their dream.