I fell in love with Rory and Longinus and the city of Damsport when I read The Bloodless Assassin last fall. So, when I learned the book I read was only the first book of a steampunk series, book 2 (which did not yet have a name) became one of the most anticipated new books of 2016 for me. From the first word on page one to the last word on the final page, The Black Orchid met all of my expectations and has a place on my favorites shelf!

On April 29, my review for The Black Orchid will post at Smart Girls Love SciFi Romance.  I hope you will check that out.  But in the meantime, I thought I’d feature a few short excerpts that I really enjoyed and that depict why I love these characters so much.

He had taken such care over dressing the part too, right down to selecting just the right shade of aggressive nutmeg for his waistcoat — elegance mixed with a hint of intimidation.

“There’s a lack of black silk, and who has need of black silk more than an assassin? Maybe we have a new assassin in town…”

“Oh, I know her well enough,” said Longinus nonchalantly. “We’ve had sartorial disagreements by proxy, and that tells me all I need to know about her.”

She backed the spider to one end of the roof and pushed it to full speed, hurtling towards the opposite edge. As she reached the edge, she pushed the lever that released a powerful burst of steam from the spider’s abdomen and legs. They jumped easily to the next roof.

“Yeah!” she shouted, grinning from the thrill of it. Cruikshank had taught her to use the spider, but had never let her take it out of the workshop. This was infinitely better than making it jump over chairs.

They jumped again, and Rory increased the speed. Her rope-like hair streamed behind her. The spider’s legs moved so fast on either side that they were a blur, and the rapid clicking they made sounded like rain hitting the tiles.

Rory threw caution to the wind, hooting and cheering at each jump as they continued to race towards Longinus’ tailor.

Longinus was so pale as to be almost grey by the time they reached their destination.

“This method of transportation is entirely inadequate for the Viper,” he announced in a shaky voice as he climbed down, staggering a little on shaking legs.

Longinus on Rory’s Skill With a Rapier

Rory When Longinus is Beset by Prostitutes

“Aw. Need me to defend your virtue, do you?”

“I feel a bit guilty now,” Rory whispered. “Not to mention, if we get caught, we’ll be up to our eyeballs in shit.”

“No need to get scatological,” Longinus whispered back.”

Those were just a few examples of why I adore Rory and Longinus.  Lest you think Longinus is shallow and Rory irresponsible, you should know it is not all fun and games and clothes shopping for these two.  There are plenty of serious and heartfelt moments that make them all the more appealing.

You might like to know a little about what the book is about.  Here is the blurb:

A couple of months after Rory and Longinus saved the Old Girl, they’re trying to settle into the honest life of being in her employ. Unfortunately, Rory is bored with nothing to steal, and Longinus finds living in Cruikshank’s workshop insufferable, what with the sub-par coffee and lack of suitable clothing.

When an old friend of Rory’s is found exsanguinated, Rory and Longinus fear that Myran has returned. To make matters more delicate, an important diplomat is visiting Damsport, and her death would make the city vulnerable to attack from Airnia, so the Old Girl tasks Rory and Longinus with uncovering and stopping whatever is going on.

As they investigate, clues lead them to the Black Orchid, a new brothel in town where the clientele has a tendency to vanish. But when the diplomat’s bodyguard is found dead outside the Black Orchid, Rory and Longinus find themselves framed as the masterminds behind the whole operation. To clear their names and save the city, they’ll have to solve the mystery of the Black Orchid before Myran catches up to them.

Living an honest life turned out to be far more complicated than they’d expected.

The Viper and the Urchin series on Goodreads 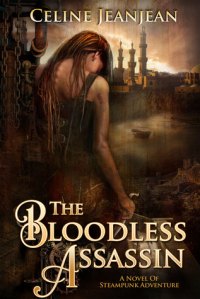